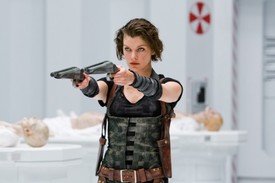 If it's true that movies can transport you to places you could hardly have imagined, then Resident Evil: Retribution is the cinema's ultimate passport to purgatory. As an action film in the conventional sense, the fifth installment of the Resident Evil franchise (ostensibly derived from the videogame series of the same name) is a mind-boggling mess of mutated cool, a nü-metal orgy of oozing brains and leather busts that's held together by one-liners and centrifugal force. In a vacuum, Retribution sucks almost as hard as its post-apocalyptic predecessors, edging ahead on the strength of Paul W.S. Anderson's evolving eye for design and deteriorating patience for logic. But as a portrait of non-action, Anderson's latest opus is something of a revelation, a sinkhole of fetishes that reveals the nearly indistinguishable Resident Evil films as works of outsider art. While it may be better suited to loop in a gallery than unspool in a movie theater, mounting apathy for the series shouldn't stop Retribution from giving Finding Nemo's 3D reboot a serious box office brawl, even if the franchise invariably renews itself on the strength of foreign markets.

Picking up where 2010's Resident Evil: Afterlife left off, Retribution reintroduces us to a future world ravaged by corporate-created zombies, wherein Alice (Milla Jovovich) and her cargo ship of fools represent humanity's only hope for a livable tomorrow. But Retribution quickly collapses the series' sloppy mythology in on itself, with Anderson sacrificing the tenets of a good zombie movie in order to repurpose them as a great zombie simulator.

The Resident Evil films are fueled by a spirit of perpetual reinvention, and so it's not much of a surprise that Retribution literally begins in reverse. An impressive action sequence aboard the ocean tanker introduced at the end of the previous film is played balletically backwards, as Alice's body hiccups out of the sea and onto the deck, where the missile that knocked her into the drink is sucked up by the attack copter that fired it. It's a self-serving but unprecedentedly elegant introduction for a Resident Evil film, re-orienting viewers to a movie world in which all the clocks are set to bullet-time and consequences are a myth.

Indeed, the reset button may be the most important thing that Anderson bothered to import from the virtually unrecognizable videogame series, as few moments in these films are predicated on the ones before them or responsible for the ones to come. To that end, we cut from Alice's body sinking into the ocean to an extra-dimensional briefing session, where she reviews the events of the previous films so plainly that Retribution could double as an ESL teaching aid. Her recap focuses on the first movie, reminding audiences of the Umbrella Corporation's interest in biochemical warfare, and the incident at an underground testing facility where an AI system went rogue and eventually spread the virus that threatens to extinguish the human race. (Or in Alice's words, "Lots of people died.") Movies 2, 3, and 4 are glossed over in a blur of short clips that underscores their irrelevance and assures new audiences that the Resident Evil movies don't tell stories so much as they provide variations on a theme, and that theme is: "a pubescent boy's wet dream recast as an antiseptic dub-step nightmare."

Of course, even empty rooms have corners. By this point, Anderson has so recklessly expanded the Resident Evil universe into the nether recesses of nonsense that the series can only survive by circling around and eating itself alive. It's a notion that Anderson owns with remarkable clarity, devising Retribution as his opportunity to ride that ouroboros like he's taming a dragon. He plunges the movie into a marvelously non-linear sequences that plays like Beyond the Black Rainbow on studio steroids, eventually revealing that Alice is stuck in an experimental facility filled with artificial cityscapes (Times Square, Tokyo's Shibuya Crossing) to simulate how a viral outbreak might play in the real world. But Anderson's true intentions emerge with his villain, as he connives a way to resurrect almost all of the characters from the first Resident Evil film, basking in the franchise's stubborn refusal to effect change. As our heroes blast their way through the facility's various levels, the stakes couldn't possibly be smaller or more abstract (and the same can be said of Alice's outfits). All that really matters is that the movie completes the circle, and that the right characters survive so that the franchise can continue serving as an emblem of infinity. There's no hope, there's no way out, and change is as much of an illusion as the environments in which Alice is trapped. There's always another level, and so the only suspense lies in seeing precisely how Anderson will contrive to for his characters to advance without ever really accomplishing anything.

Somewhere between the franchise's most compelling set-pieces, ridiculous costumes, and hummable battle anthems, Anderson's most gleefully demented spectacle refocuses the entire franchise as a mesmerizing example of self-cannibalizing corporate totality. While other action franchises have also operated in a serialized fashion, Resident Evil is the first to use its stubborn stasis as a guiding light. As Retribution's epic final shot soars away from the action to in order to once again illustrate the futility of escape, Anderson's idiot-savant masterpiece feels like the first zombie film to truly understand what it means to be undead.