close
Keanu gets smart—but his doc is dumb 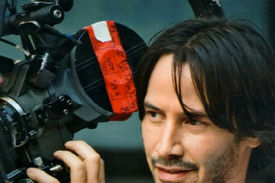 In this very strange passion project, Keanu Reeves goes around and interviews a bunch of his famous friends/collaborators about movies' transition from celluloid grain to digital pixels. The title promises a compare/contrast, even-handed assessment, but Side By Side is basically an industry-friendly tract about the wonderful things Hollywood has in store. Lots of people speak about the wonders of digital, only to be occasionally interrupted by a dour Christopher Nolan playing the role of unreasonable Luddite. Pedestrian helming of a niche-market concern guarantees low returns.

Certainly there's novelty value in watching Keanu—in various of facial hair growth, occasionally beanie-clad—asking, say, David Lynch to clarify whether he's done with film. ("Don't hold me to it, Keanu, but I think I probably am.") Side By Side begins with a Oscars-year montage on The Magic Of The Movies and moves on to become an entry-level film class, with Keanu dutifully explaining how a camera works, his stultified voiceover narrating how light hits celluloid. Subsequent segments examine digital's transformation of editing, special effects and so on.

Every segment's roughly the same. Famous people will roll up and voice mild skepticism about an aspect of digital filmmaking before giving conversion testimony. Bill and Brendan Ryan's score has a very mid-'90s PBS air, peppily innocuous and slideshow ready; you half expect to see animation of mitochondria dividing. The soundbites can be entertaining—Steven Soderbergh, predictably, is briskly dismissive of film purists and enjoyably waspy—but anyone who's spent any time reading about these issues will learn nothing. Nor will the uninitiated benefit from this as a starting-point primer, since the pro-digital propaganda feel is a major detraction.

There's, inevitably, some fascination in seeing the likes of heavy-duty DPs like Roger Deakins and Michael Ballhaus talking about color spectrums and technical challenges. But the most infuriating part comes at the end, when the issue of film preservation comes up. Scholar David Bordwell has written extensively about the numerous problems of keeping film history intact when a new technological platform comes up every 18 months, and here, David Fincher notes that he has videos in unplayable formats from the beginning of his career. An industry that's lost 90% of its silent films and which has consistently demonstrated—montage lip-service aside—a staggering lack of interest in its own history can hardly be trusted to transfer films from format to format and keep them intact, let alone in good shape. The film's obtuse response: cutting from Fincher to George Lucas saying, effectively, "Trust us, we're experts." No worries!