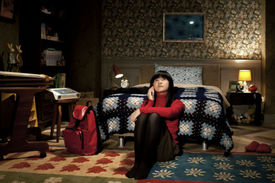 Think of all the bad things that can befall a 13-year-old girl: her favorite grandparent dies, her parents get divorced, she's picked on at school, the boy she likes has some major issues. In the new Taiwanese film Starry Starry Night, adapted from a comic book of the same name by Jimmy Liao, these familiar plagues of adolescence afflict Mei (Josie Xu) all at once. Though rife with clichés, Starry Starry Night has just enough nostalgic melancholy and quiet whimsy to make its coming-of-age narrative and elegy to childhood emotionally and visually compelling. A convincing take on much of the same material as this year's Moonrise Kingdom, the film's universal themes and cute hallucinatory images should make it an easy sell to fans of Asian cinema, especially younger viewers.

The world of Starry Starry Night is a canvas for the rhapsodic emotions of its young female protagonist. In the opening scene, Mei peers out at the world under a heavy curtain of hair. She sits at a train station, fretting hour after hour, trying to decide whether she should run away to her beloved grandfather's rural cabin or return home to her bickering parents. Snow starts to fall in the station, mirroring her cold dread. In a later scene, she sees the troubled new kid in school, Jay (Eric Lin Hui Ming), marching toward a fight with some classmates. Lurching behind Jay's slight, fragile frame is a colossal shadow of a dinosaur, stamping impatiently with rage in each step.

These childlike images—which also include a life-sized wooden blue elephant and a parade of white bunnies making bubble sounds—add up to a charming but reserved whimsy. There aren't enough of these fanciful images in the film to be satisfying, but that may be the point: the time has come for Mei to lose the ability to see and feel this way. To escape her troubles, she looks for adventures—a way back to childhood—but all roads propel her forward into the stony gray of adult life. When she finds a much-needed refuge in Jay, she's forced to grow up all the faster by having her problems, however painful, put into perspective by his far greater ones.

It's a pleasantly stern message for kids: growing up means learning that other people have way bigger things to deal with than you do. So it's disappointing that Mei and Jay are such underdeveloped characters, broadly sketched as Nice Insightful Girl and Sensitive Bad Boy. It doesn't help that writer-director Tom Shu-Yu Lin doesn't seem to trust his child actors, choosing to telegraph emotional scenes through twinkling music and long, mournful shots of the stars' slumped backs. Lin's lack of faith is misplaced; the leads' charisma increases as the movie progresses, especially in the buoyant last third of the movie, when the two friends run away into the woods and indulge in the best thing you can do with someone at that age: trust someone with your secrets.

Starry Starry Night could have made up for its well-worn coming-of-age tropes with visual flair, but there's an overly familiar quality to its iconography as well. Its signature images all feel borrowed and hackneyed, from the van Gogh painting of the film's title to the protagonist's resemblance to Emily the Strange to the rounded, pastel features of Mei's cartoon universe. It doesn't help that Starry Night's symbolism is often so heavy-handed that the film seems to have anvils for arms. But if the story and visuals suffer from an unremarkable charm, the sophistication of its precocious sadness and dignified farewell to innocence cannot fail to make an impression.