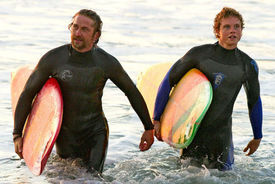 In 1994, 16-year-old surfer Jay Moriarity braved the biggest waves ever seen off the coast of Northern California. His biopic, Chasing Mavericks, gets that fact right but changes everything else about his life in order to bowl audiences over in a saccharine tsunami. Though co-directed by Curtis Hanson (L.A. Confidential) and Michael Apted (The Chronicles of Narnia: The Voyage of the Dawn Treader), this feel-good froth is distinguished from a TV movie only by the continual, expensive, pounding, astounding shots of surfers surviving McMansion-sized crests that threaten to tumble down and thrust them 40 feet into the deep. That actually happened during shooting to star Gerard Butler, who had to spend a day under hospital observation. When Chasing Mavericks' middling box office receipts are totaled, his agent will be thrilled this movie didn't cost him his career.

Butler plays Frosty Hesson, a Santa Cruz surf rat who barely slinks out of the water enough to support his wife (Abigail Spencer) and two daughters with the occasional construction gig. Like the depths of the Pacific, he's cold and dark, floating over the deepest part of the coastal trench and revealing, "I'm attracted to the abyss." Frosty's neighbor boy Jay (ripped newcomer Jonny Weston, successfully aging himself down 8 years for the role) is, like him, an athlete who's never far from a faster way to move, be it by longboard, skateboard or bike. And Jay has his own issues: an alcoholic mom (Elisabeth Shue) who borrows the money he makes at his minimum wage pizza gig, a soldier father who never bothered to come home after his last deployment, and most pressingly to the hormonal teen, a massive hang-up on the older girl next door (Leven Rambin) who won't be seen with him in public.

Santa Cruz—a hippie oceanfront hamlet 90 minutes south of San Francisco—sounds like paradise. But Hanson, who also directed 8 Mile, gives it a whiff of Detroit from its high unemployment rate and drug-dealing economy, to its hot drunk moms and even an inexplicably angry kid we first meet smashing rearview mirrors while dressed like mini-Eminem. Chasing Mavericks' desperation is more credible than its dream-catching. The most resonant subplot comes from our own awareness that Jay has only two options in this burnout town: become a surf bum or a surf soldier. His best friend Blond (the ironically brunette Devin Crittenden) is already hanging with the stoners and selling weed. And not only is Jay no scholar himself—his mom actually praises him for getting a C in Spanish—no one in this flick even mentions the word "college."

No matter. According to Jay, he doesn't expect to live long anyway, which frees him up to get all his education from the sea. After treating the boy like a stray cat for the film's first act, Frosty—a guy who doesn't even read to his own children—magically unearths his inner zen master ocean guru, a Mr. Miyagi of the seas, who synchronizes teaching Jay to surf big waves with teaching Jay to be a man. He even requests, and harshly grades, the boy write no fewer than four three-page single-spaced essays on topics like "fear versus panic" and "the power of observation."

That the two help each other mature is as inevitable as the tides. So, too, is the plotting of this formulaic flick. But given the violence of the ocean and the death that looms in every monster wave, the intentions of Chasing Mavericks churn as wildly as the waters. Moriarity was right to predict that he'd die young, which makes him a questionable role model at best. (Though in Santa Cruz, "Live Like Jay" bumper stickers are as popular as "Visualize World Peace.") Even before the coda, parents are right to pause before buying their kids a board—just this week, a surfer was eaten by a shark down the coast in Santa Barbara. But to its credit, Chasing Mavericks celebrates the hard work Jay and Frosty invest in prepping for a big wave almost as much as they do in the tubular ride itself. After a summer of spandex-clad superheroes conquering the literally impossible, it's heartening—if head-scratching—to see two ordinary men in their own tight neoprene suits seek out danger and prove the bravery of mankind.