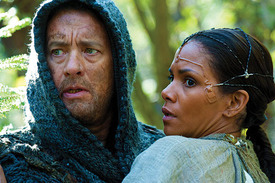 David Mitchell's post-modern, head-spinning novel Cloud Atlas (2004) was long considered by no less an authority than the author himself, unfilmable. It was declared too expensive to produce, and too sprawling, dense and complex to successfully convey cinematically. Yet if film audiences have learned anything in the last 15 years, it's that Tom Tykwer (Perfume) and the Wachowski siblings (The Matrix) are not afraid of expensive, sprawling, dense and complex projects. All three, even in failure, are virtuosic technical directors and they prove it again here, sweeping us away in a sextet of stories that jump back and forth across half a millennia. In book form, the chronologically roomy environment allowed Mitchell to excite, challenge and enlighten his readers. The movie version has the exciting and challenging parts down but the moral awakening it so strenuously wants us to experience remains beyond its reach. Without it, Cloud Atlas gets downgraded to a fascinating, oftentimes thrilling, experiment in storytelling logistics, as three directors wrestle a difficult novel to the ground and create a work that is rapturously grand in scope and ambition, if not emotional effect. What's crucially missing is the one thing all the computer generated panoramas and self-serious philosophizing in the world can't buy: the power to stir an audience to rethink their own lives in the same way as the film's eternally connected characters. Public reaction is destined to be mixed, as many will proclaim the six-minute extended trailer released last July a more affecting experience than the complete film. Warner Bros. should eventually see some return on its limited investment, as the film was primarily bankrolled overseas.

Its noble failings aside, Cloud Atlas is a technical triumph, especially in its editing. Cutter Alexander Berner miraculously manages to keep all six stories straight and vary the pace beautifully over a 171-minute haul while letting themes, visuals and dialogue bridge the centuries in a single cut. It's even more impressive that the enterprise coalesces as well as it does considering there are three directors (two if you want to count the Wachowskis as one entity, since they've never directed a film separately). The division of labor can be accurately guessed by assessing their previous works. Tykwer directs the three contemporary stories: the 1930s Cambridge-set tale of young pianist Robert Frobisher (Ben Whishaw) who becomes an amanuensis to a cranky composer (the great Jim Broadbent); a whistleblower thriller set in 1970s San Francisco; and the comedic story of frantic, aging publisher Timothy Cavendish (Broadbent again) and his escape from a rest home. Unsurprisingly, the Wachowski-tackled sections feature thematic parallels to The Matrix, where one person making one choice ignites a revolution. In the mid-19th century, American notary Adam Ewing (Jim Sturgess) sails the South Pacific, befriends a slave (David Gyasi) and begins to doubt his participation in the slave trade. Three hundred years later, a genetically engineered "fabricant" (Doona Bae) toiling in a Korean restaurant dreams of rebellion after meeting Chang (also Sturgess), commander of a group fighting against the government. Finally, at least from a chronological standpoint, post-apocalyptic tribesman Zachry (Tom Hanks) helps a visitor (Halle Berry) from an advanced civilization.

Both book and movie stress the interconnectedness of souls, which the filmmakers dramatize, to mostly positive effect, by having the actors play multiple parts. In a nod to the difficulties of funding a film of this magnitude, the cast features internationally known, top-draw names. Yet it's the lesser known performers who register the strongest, since getting lost in this world is crucial to its impact and, let's face it, Tom Hanks with a beard and a putty nose is always going to be Tom Hanks. The actor who best embodies the film's ambition and sense of differentness is South Korea's Doona Bae. Her open, otherworldly face and deceptively demure performance as Sonmi-451 transports us to the Neo-Seoul of 2144, where she gets to articulate the movie's increasingly tiresome New Age platitudes. Sonmi's words resonate across the centuries as she becomes a god in Zachry's post-apocalyptic society (tellingly, only the primitives here profess belief in a deity). Bae, best known stateside from Joon-ho Bong's The Host, also plays Adam Ewing's 19th century beloved as well as a Mexican woman in 1970's San Francisco. None of these transmigrations come off as self-conscious stunts, even the ones that are self-conscious stunts. Hugo Weaving, who has been chewing on villainous dialogue with glee since at least The Matrix, plays Old Georgie, the top-hatted embodiment of Zachry's primitive beliefs. He also shows up in full drag as Noakes, the Nurse Ratched of Cavendish's rest home. For his part, Hanks begins as the heavy and then slowly, as past becomes future, evolves into the hero. Hugh Grant embodies, no coincidence here, contemporary corporate indifference and, centuries later, a cannibal. Further servicing the themes, all six stories factor into some, or all, of the other stories, as when Frobisher encounters Ewing's seafaring journal and Cavendish's retirement home adventure is made into a movie viewed over a century later by Sonmi.

It's all meant to emphasizes the primacy, mutability and infinite nature of the soul, as opposed to its temporary housing in our fragile body, something that surely resonated with co-director Lana (formerly Larry) Wachowski, who was of a different sex until recent gender reassignment surgery. It also emphasizes how one simple act can alter the course of our personal legacies, a point that Cloud Atlas makes repeatedly, loftily and with a sleek cleverness that ultimately proves less edifying than making the same arguments with a messier, less superficial sense of inquiry. It's comforting in a kind of intellectually facile way to learn that we're all connected by elemental, unseen forces. It's less comforting, although more ennobling, to learn that we're also connected by personal and governmental constraints that a single thought, put into action, can overcome. However, if Cloud Atlas is to be fully believed, conflicts based on class, race, gender and raw, irrational hatred will continue long after Mankind has destroyed itself and is living in huts. This renders many of the film's sentiments stimulating but pointless. They would, however, make for a hell of a book.