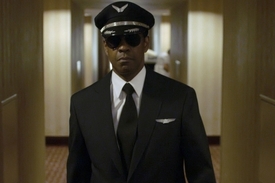 In Robert Zemeckis' Flight, an ethical dilemma is drowned by a stock alcohol addiction-and-recovery saga that's in turn overshadowed by what the MPAA aptly describes as "an intense action sequence." Commercial pilot Whip Whitaker (Denzel Washington), drunk but in control, responds heroically to mechanical malfunction on his morning flight, guiding his nose-diving plane to earth and saving 96 passengers out of 102. A 94% survival rate isn't shabby, but a National Transportation Safety Board investigation threatens to put Whip in jail if his drinking can be linked to passenger deaths. Whip boozes through his legal troubles and spirals closer to the bottom. Can he stick his own landing? Washington, a reliable box office draw, should bring opening week audiences to theaters, which means Flight should at least soar into the black if people respond with good word-of-mouth, even if only for the novelty of a big-budget adult drama that aspires to intelligence.

Flight begins dangerously, invigoratingly close to black comedy. After a night of partying, Whip wakes up with the dregs of a High Life and a line of coke. As he snorts, Zemeckis and DP Don Burgess throw a Steadicam into his face—a hackneyed way of depicting the drug's effects, but giving Flight a kinetic momentum that's maintained for a relentless, gripping opening half hour. Interrupted only by seemingly unrelated scenes of junkie Nicole Maggen (Kelly Reilly) bingeing her way to the hospital, Whit cruises through his morning, blasting through stormy takeoff skies to a safe cruising altitude, citing his excellent track record of on-time departures (a tacit reminder, Zemeckis and screenwriter John Gatins noted at a New York Film Festival press conference, of the pressures commercial pilots face to maintain the bottom line). Pouring two airport mini-containers of vodka into his orange juice, Whip goes to sleep.

Then disaster. First, the co-pilot's handle is crippled, then the hydraulics, then a full-bore engine-shedding emergency. Plunging towards the ground, Whip improvises and turns the plane 180 degrees to cruise to a safe landing space. The superbly rendered sequence—the camera calmly locked right-side-up as the passengers hang-upside down while Denzel keeps his cool—is a reminder of the importance of spectacle in Zemeckis' work. (He is, after all, the director who gave audiences Doc's DeLorean). But this impossible feat of derring-do and directorial problem-solving is so good that it overshadows all that follows, even working against the film itself as it tries to get us to settle down on land and care about a functional alcoholic unable to continue his lifestyle.

Waking in a hospital, Whip talks to his union's pilot representative Charlie Anderson (Bruce Greenwood), a friend from his Navy days, and later learns the body count from a NTSB rep while a court recorder ominously types out the exchange—the first sign a legal storm is brewing. Nicole, the addict from the early scenes, meets Whip at the hospital during a furtive shared stairwell smoke (this is one of the nicotine-heaviest mainstream films in recent memory), after which Whip is discharged and drives to the farm once owned by his Tuskegee Airman father. Regrouping with Nicole, who's now attending AA meetings, Whip sits through one and leaves quickly. "We are not the same!" he barks at Nicole. "I don't suck dick to get high."

Thorny ethical side dilemmas sprout around Whip's repetitive binges. The FAA places ten pilots in simulations, all of whom fail to replicate his feat. He's an unquestionable hero, but someone has to be held accountable for the fiscal fallout and potential manslaughter charges. That places the airline at risk of shuttering, which in turn would lead to the firing of thousands of union employees. Clearing Whip's name is a matter of ethical expediency and fiscal necessity, and it requires his cooperation with union defense attorney Hugh Lang (Don Cheadle), who merely asks Whit to remain sober—an impossible task.

Independent of the investigation, Whip grumbles at the daily services held by the nearby Pentecostal Church at the accident site, unambiguously depicted as a comically tasteless, self-aggrandizing response to tragedy. "What kind of God would allow this to happen?" he fumes. In his impatient secularism, Whip's a descendant of Contact's Ellie Arroway, whose lack of belief nearly led to her disqualification from a space voyage. Intentionally or not, Zemeckis has now directed two of the more explicit defenses of atheism in Hollywood history, while granting believers a charitable portrayal: Matthew McConaughey as a Christian philosopher in Contact, and here, the maternal flight attendant Margaret (Tamara Tunie), who disapprovingly covers for him. Meanwhile (and less impressively) devout co-pilot Ken Evans (Brian Geraghty) also conceals his knowledge of Whip's boozing, but because he believes that Jesus guided Whip to safety. (Throughout their hospital conversation, Evans' girlfriend randomly blurts out "Praise Jesus!" tipping the tone towards caricature.) Still, both flicks end apologetically: Contact with fuzzy New Age spirituality, and Flight with Whip implicitly recognizing the "higher power" AA enrollees are encouraged to rely upon.

John Gatins' screenplay parcels out background information in commendably inconspicuous ways. There's no explanation of or reductive cause for Whip's drinking, and it refuses to demonize either the investigating body or the airline's owner. But the emotions go overboard in all segments related to Nicole, as well as in Alan Silvestri's soupily needling score. While Flight gives the corporate machinations around Whip commendable narrative time, his alcoholic endgame is the film's unavoidably repetitive focal point. John Goodman's cameo appearance as drug buddy Harling Mays is a blackly funny, cocaine-fueled scene that clashes with the sober somberness of the tone, while song cues are heavy-handed, blasting Joe Cocker's cover of "Feelin' Alright" ("I'm not feeling that good myself") during Whip's addled morning, and "Sympathy For The Devil" as Goodman enters the picture. Zemeckis intends to give us a slightly more depraved version of Washington's usual charismatic hero, then pull the rug out from him. But Flight's true downward spiral is its own loss of momentum.