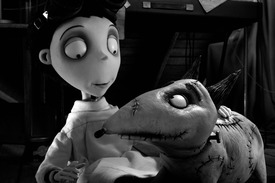 The horror-loving Tim Burton gives a classic boy and his dog story a Frankenstein spin in Frankenweenie, a feature-length adaptation of his own delightful 1984 short in which a science-obsessed kid named Victor brings his pet dog back to life after a tragic accident. Shot in glorious black and white and beautifully voiced, this magnificent stop-motion cartoon is alive—"it's alive!—with laughs and heart. Hilarious, exciting, touching, scary and richly entertaining, this Disney entry for the Halloween crowd should make waves at the box office way beyond what Burton's Dark Shadows approached earlier this year. You'll want to see Frankenweenie more than once just to catch everything, so expect an solid run and a ghoulishly good afterlife in ancillary and DVD.

Burton sets his greatly expanded story in small town suburbia where young hero Victor (voiced by Charlie Tahan), a whiz at science experiments, finds inspiration in his slightly nutty teacher Mr. Ryzkruski (a terrific Martin Landau), who just happens to look like Vincent Price. So when Victor's beloved pet dog Sparky is run over by a car, the crestfallen boy uses all his new-found know-how to actually bring his pet back to life via an electrical shock. Of course Sparky, isn't all he used to be. Now, his tail falls off easily, but in his soul, he's still the same sweet, dumb pet.

Complications arise when Victor's conniving classmates get wind of his achievement and attempt the same thing on their own in order to place first at the science fair. This leads to a harrowing sequence set in the town's cemetery where a number of pets not only find new life, but new strength, including a Godzilla-like turtle who terrorizes the town. Victor must swing into action and save the day and the town—and his zombie pet, if he can.

Burton's expansion of his simple short is nothing short of brilliant. He's cleverly found a way to bring his charming but one-dimensional mini-movie to full-feature life. And his smart decision to keep his cartoon in black and white is right in tune with the Universal horror movies that inspired it. Not only is the look of Frankenweenie simply spectacular, but at its core it has a lot of heart, making it memorable for moviegoers of all ages. Beware: some sequences can be a tad frightening for younger audiences. But overall, this is a love letter to horror movie fans everywhere. Burton may make blockbusters, yet he's first and foremost a true fan of the genre and it shows. The voice cast is impeccable, led by Tahan but also featuring such top talents as Martin Short and Catherine O'Hara as Victor's parents, the wonderful Landau, and even Winona Ryder in as Elsa Van Helsing. Break out the candy and head to the movies—Frankenweenie is a real Halloween treat.