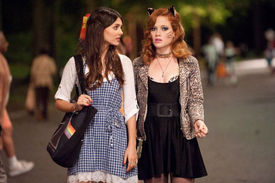 Boobs. Boobs. Boobs. Boobs. Boobs. If your tween can handle that, they can handle the Halloween comedy Fun Size, Nickelodeon's naughtiest kids' movie, and the first in their catalogue to include underage drinking, morning after hook-ups, and a scene where a giant robot chicken humps a Volvo. But who's complaining? Not the kids delighted to see their schoolyard obsessions slapped on the screen—and their blushing parents should remember that they saw much worse in the '80s. Fun Size isn't good enough to ascend to those John Hughesian ranks, and its small holiday window means it won't scarf much box office. But at least first time feature director Josh Schwartz can expect a minor slumber party hit on DVD.

Our heroine is Wren Desantis (Victoria Justice), a leggy brunette with model cheekbones who has the task of convincing us that she's, like, OMG, such a dork. According to best friend April (a hilariously vapid Jane Levy), despite rocking her dad's awesome vintage Def Jam windbreaker and looking like a suburban Keira Knightly, Wren is teetering on the edge of social ruin, especially if she follows through on dressing up as Ruth Bader Ginsburg for Halloween. (Even Sexy Ruth Bader Ginsburg won't do.) Wren's only real popularity handicap is her mute, but destructive 8-year-old brother Albert, played by Jackson Nicoll, who, though good, will someday be mercilessly teased for being in a movie that opens with him naked on the toilet. Also in the mix are their recently widowed mom (Chelsea Handler), mom's 26-year-old rebound boyfriend Keevin (Josh Pence), nerdy boy-next-door Roosevelt (Thomas Mann of Project X), and the school dreamboat Aaron Riley (Thomas McDonell), who claims he's written Wren a love song that he's going to perform Halloween night at his big house party. Writer Max Werner must be a Jordan Catalano fan.

When Albert goes missing on the big night, Wren and crew must find him before mom finds out. This means pacing the mean streets of Cleveland, which Wren calls "the mistake by the lake," but on film looks like the hippest Norman Rockwell town in America where everyone—literally everyone—crowds the city in costume on Halloween. (Of all of costumer Eric Daman's great work outfitting his cast and extras, the best looks are Johnny Knoxville's Dog the Bounty Hunter, Osric Chau's Vice President Aaron Burr, and a pack of white geeks dressed like the Harlem Globetrotters.) The ramshackle plot device doesn't hold much interest, so the only payoff is the random asides shoehorned in, like Roosevelt's reveal that his "moms" is literally two lesbians (Kerri Kenney and Ana Gasteyer). "I thought he was just talking like Lil' Wayne," mumbles Wren, but Fun Size is so well meaning enough to make sure it proves that the two are great parents, albeit ones pathologically devoted to their asthmatic cat.

Since Wren is not much of a character besides being sweet and gawky—even her grating voiceover doesn't reveal depths beyond, "Okay, so now I really need to figure out my costume!"—it's up to her support team like mini-market employee Fuzzy (Thomas Middleditch) to carry the broad and boob-crazy comedy. In one scene, snotty sophisticate April makes a bargain with Aaron Burr that involves him getting to cop a feel for 20 seconds, which eventually leads to more. But the coded references to sex have a goggle-eyed Mad Magazine innocence, and some of them—like Fuzzy's misty recalling of the "good memories" he made at his ex's apartment—will pass over kids' heads entirely. Oddly, much of the running time is given to Chelsea Handler's awkward night at a party with her much-younger boyfriend and his much-younger friends, an extended night of horrors that seems to cry out for its own movie where the filmmakers could really let loose. But the kids who can't empathize with her struggle to get her groove back at least get jokes about farts and candy—tricks and treats—and for Fun Size's target audience, that's all a Halloween movie needs.