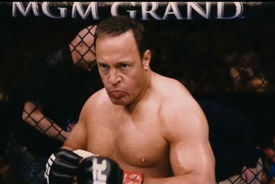 If Viola Davis could throw a punch, Won't Back Down would have ended a lot differently. But Kevin James can—kinda—so instead of fighting teacher's unions, this month's second flick about failing schools has a different solution: make the biology teacher fight MMA. (Though that means facing 205 lb heavyweight Krzysztof Soszynski, James may have the easier task.) Here Comes the Boom is Rocky for fifth graders, with enough pro-school propaganda to make parents think it's worth the price of popcorn. Like James in the ring, it doesn't pack a lot of power, but it comes out swinging and sweats for applause. Boom won't be a box office knockout, but if it hits its target audience of preteens, it can leave theaters a humble success.

As tenured teacher Scott Voss, James plays his usual sweet schlub: he's lazy and immature but with an aw-shucks heart of gold that almost makes it okay that he literally wakes himself up snoring. He's got a universal appeal like Adam Sandler did 15 years ago before he got all sour and stupid, and even Sandler seems to recognize it by folding him into the Happy Madison family to play the kind of bumbling hero roles he abandoned after Big Daddy. Scott Voss is tenured and ten years away from when he last strained himself to win Teacher of the Year. Now, he's more invested in pooling his vacation days and skipping out of bus duty to be bothered teaching his students (which include Filipino pop star Charice—savvy move, casting agents) anything about cellular structure.

The school's standout teacher is orchestra leader Marty Streb (Henry Winkler), who couldn't be further from the rock-and-roll Fonz. Marty is a gray-haired bleeding heart who thinks Neil Diamond is way cooler than metal, but underneath his baggy cardigan, he's still virile enough to have knocked up his nearly 50-year-old wife. And with Marty's music program about to be canned due to a $48K budget shortfall, Voss leaps—or really, lurches—into action with the goal of losing a fight on UFC pay-per-view, which will pay him $10,000 for letting a truly frightening thug like Soszynski beat him senseless. Winning isn't even a possibility—like Rocky, this is a movie about martyrdom, and while we see James bloodied and bruised, none of the punches he lands even leave a mark on his opponents lest we lose sympathy for his battered heroism.

Happy Madison comedies usually exist in a world of McMansions and rich and restless whiners, like Adam Sandler can't step away from his life of luxury long enough to make a movie about average people. But Kevin James is willing to go blue collar, which gives his dumb, but charming movies like Boom and 2009's underrated Paul Blart: Mall Cop a shiver of empathy. Everyone in Boom is hurting from the recession: James has to teach Citizenship classes to stay afloat, his construction worker brother is laying off his employees, his star student has to scale back her education to help out in her family's restaurant.

Director Frank Coraci (The Wedding Singer, Click) is a dramatist trapped in a comedy career. I wept buckets at Click when Adam Sandler's magical remote control fast-forwarded him too far into the future, and I'm not ashamed—if you didn't, you're a ghoul. It's fitting, if weird and counter-productive, that here Coraci cares so much about nailing Boom's financial woes that he's forgotten to add the jokes. You can't laugh at the movie so much as sigh in wry recognition. Still, Salma Hayek is solid as a headstrong school nurse who challenges James outside the ring, and ex-MMA fighter Bas Rutten is great as a coach who brags that he owns his own MMA gym, when he's really just teaching spin and yoga at the Y. His scenes with James and Winkler have a bromantic chemistry that will play well at a middle school slumber party, while kooky character actor Shelly Desai, playing a Mexican immigrant in James' citizenship classes, gets the film's few surrealistic belly laughs, mainly just from Desai widening his eyes and squashing his face until he looks like a toad. His bits at first just seem like dashed off asides until Coraci sideswipes us with a literally flag-waving ending where Desai yelps, "Viva America!" That gets people stumbling out of the multiplex smiling, until you remember it's American capitalism that got everyone into this financial fix in the first place, and it's American priorities that are leaving real life teachers and fake ones like Kevin James and Viola Davis no choice but to put up their dukes.