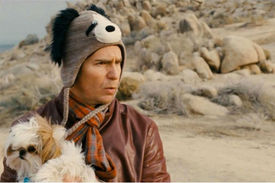 It's easy to understand why Martin McDonagh, an exceptionally accomplished playwright, is transitioning towards the cinema: Violence. Sure, there's an immediacy to an onstage slap, and when Stanley Kowalski rages at Stella the audience gasps because the brute's abuse feels so horribly possible. On the other hand, when was the last time you saw a Broadway show detonate a cow above the orchestra pit (an event seen in McDonagh's Oscar-winning short, Six Shooter)? McDonagh may not fetishize violence, but it's a vital conduit for his artistic expression, like fields of wheat for Terrence Malick or cutaways of roadkill for Lee Daniels. McDonagh's first feature, the quietly loved In Bruges, was an existential treatise enlivened by making its bullet-points with actual bullets. His latest, Seven Psychopaths, a gangster bromance that plays out like Tarantino riffing on Adaptation, stars Colin Farrell as Marty, a creatively frustrated screenwriter whose demented best friend (Sam Rockwell as Billy) is determined to help his pal write a script called "Seven Psychopaths." Chaos ensues. A cleverly daft meta-romp that will be best remembered for its quotes, Seven Psychopaths is a game and garishly shot production that's elegant in its own seedy way. McDonagh's fanbase and a deep cast of character actors should prove irresistible to demos hungry for R-rated fare, but the film won't find its real audience until it hits ancillary markets.

Seven Psychopaths begins by succinctly illustrating why McDonagh has gravitated towards the movies. Two hitmen (both familiar faces) stand under the shadow of the Hollywood sign and banter about America's history of violence. They face outwards towards the audience, chatting about the particulars of John Dillinger's murder until a masked killer casually walks up behind them and shoots both hitmen in the back of the head. The opening gambit plays like a passing of the torch, a nod to the calculated cool of Pulp Fiction and a rejoinder to the self-control that made that mode of filmmaking possible. Seven Psychopaths establishes early and often that McDonagh's characters subscribe to a "shoot first, joke later" philosophy, and the biggest challenge that Marty faces with his serial killer script is finding a way to keep his characters alive long enough to tell a full story.

As Marty, Colin Farrell (who also starred in In Bruges) is obviously standing in for McDonagh, an amusingly self-flattering bit of casting through which the director promotes his muse into his proxy. Nevertheless, Marty isn't defined by the extent to which he reflects his creator, or by his haggard good looks or even by his functioning alcoholism. No, what endears Marty to us is the fact that he's the only sane person in a movie brimming with psychopaths—the film lists seven of them, but introduces us to at least seven more. It's not especially troubling to learn that Marty's best friend Billy kidnaps dogs for a living (we've all been there), but it's never a good sign when your buddy is using Christopher Walken as a foil. Walken—as Hans, his best part since Catch Me if You Can—is the soul and sweetness of a movie that's at its best when it exposes a softer side. Hans is a guy with a mysterious past and a cancer-stricken wife, and Walken absolutely owns the role, dethroning Michael Caine as the king of the cravats and delivering his lines as if every syllable were a soliloquy unto itself. When Billy nabs a Shih Tzu belonging to a trigger-happy gangster named Charlie (an unleashed Woody Harrelson), it's Hans who suffers most.

The film hums with a mordant beauty as it brings together all of its motley nutjobs and branches out into extended asides in order to explore the backstory of each psychopath. Each personal history is violently romantic and soaked in revenge, all of them so bleakly comic that by the time Tom Waits appears as a morally rigid and rabbit-obsessed mass-murderer, it feels par for the course. McDonagh introduces each of his crazies like he's team-building for a heist, but watching him piece together the various strands is ultimately the movie's only reward.

How all of this gleefully grim madness figures into the development of Marty's screenplay is a bit unclear. McDonagh has a lot of fun airing his neuroses in the shape of a writer who may not survive his own inspirations, but his hero is far too passive to balance out the pageant of insanity that surrounds him. Rockwell makes for a great sociopath, but Billy's merciless enthusiasm to help Marty with his script is overplayed when the film relocates to Joshua Tree for its comparatively stagnant second half. Billy seems intent on steering the film towards a self-awareness that McDonagh is hesitant to embrace. His script too overworked mapping the relationship between style and violence to say much about either. Seven Psychopaths is a movie about the creation of a first draft, and it reflects that process in the worst ways—getting to the end is an accomplishment, but getting there well is a whole different story. McDonagh's second feature never finds the mordant beauty of his first—it's either a biting satire of retribution or a lucid look at the chaos of the creative process, but it can't figure out a way to be both. Somewhere between a mess of big laughs and a veritable Yosemite of geysering bullet wounds, this movie about movies illustrates what makes them work, but forgets what makes them matter.