close
No, seriously: "Do not go to Silent Hill!" 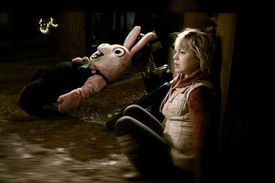 "Do not go to Silent Hill!" That's one of the first (and only) intelligible lines of dialogue in Silent Hill: Revelation 3D, but by that point you've probably already realized the magnitude of your mistake. By then, you've already been witness to the most garishly fecal color-scheme this side of the Saw movies, a screeching jump-scare bunny, and the magical "Bondage-go-Round" (which I trust requires no further explanation). So begins the unwarranted sequel to 2006's Silent Hill, a visually inspired but otherwise unremarkable film adaptation of Konami's visually inspired but otherwise unremarkable survival-horror videogame franchise. Revelation returns viewers to the titular West Virginian ghost town, which hides inside an alternate dimension where flurries of perpetually falling ash dust the people who inexplicably continue to live there, as well as the flesh-flaying demons who roam the town's darkness and hunt its citizens for yucks.

Picking up some years after the first film ended, Revelation reintroduces us to Christopher Da Silva (Sean Bean), a widowed Silent Hill survivor who lives under an assumed identity with his adopted daughter "Heather" (Adelaide Clemens). When Christopher is abducted and held hostage by a poorly sketched and intensely illogical cult, Heather must inevitably trek to Silent Hill in order to retrieve him, or something. What follows is potentially the worst film of 2012 that doesn't star Katherine Heigl, a dank and deafeningly loud 3D nightmare that will send you groveling back to the likes of Paul W.S. Anderson, desperate for a videogame movie that has even a modicum of self-respect. Bloated ticket prices and audiences hungry for a Halloween scare should help Silent Hill to overachieve in its opening weekend, but after that, it'll be a steep nose-dive to the bargain bin.

The most pleasant part of Silent Hill: Revelation 3D is the company logo that precedes the film, an icon dusted with beautiful flakes of 3D ash that fall into your lap and make the theater feel like a snow-globe. By the time writer / director Michael J. Bassett (Solomon Kane) has introduced the first frame of footage, his movie has already peaked. The opening sequence, a nightmare set inside a generically evil carnival that appears to have been colored exclusively from the crayons in Crayola's "Sewer Collection," makes it abundantly clear that the film is designed to be more of an attraction than a narrative. Indeed, Bassett's script is structured like a haunted house, but louder and with a less coherent plot. Eschewing the rich sense of atmosphere with which Christopher Gans imbued the first installment, Bassett—his hand likely forced by a budget $30 million less than that of the original film—takes a purely physical approach, opting for darkness over set design, and jump-scares over dramatic escalation.

The first sequence lays a few other things on the table, as well: Heather is haunted by something from her past, and the movie cares about it almost as little as you will. In short order, we learn that "Heather"—a blonde teenager who looks like the results of a studio executive Frankensteining Michelle Williams and Carey Mulligan into a single actress—and her dad have been bouncing around the country, on the run from a mysteriously relentless threat. It's Heather's first day of responding to that name, and her first day at a new school, a social maneuver that's complicated by the cinema's most incompetent private detective and a hunky greaser named Vincent who bears an uncanny resemblance to Game of Thrones' John Snow. Vincent's hilariously awkward come-ons ("Do you Facebook?") are tragically rationalized later in the film, but the dialogue is so painfully stilted across the board that most audiences will probably cheer when Heather encounters the homicidal asylum nurses who don't have mouths.

The first half of the film is a smorgasbord of nonsense that eventually pushes Heather and Victor into the shivering CG heart of Silent Hill, where they're forced to confront the order of irrational weirdos who obviously need Heather's blood in order to defeat the demon-child, Alessa (this is what Wikipedia is for, people). In 2006, Alessa was played by an evocatively blank Jodelle Ferland, but now she's been recast as the Platonic ideal of creepy J-horror demon girls, a thoughtless substitution that proves emblematic of how Revelation generically cheapens everything that made Christophe Gans' film so mildly enjoyable. More damningly, the "Revelation" of the title is cheaper than any of the visuals—there's no twist, just a harried regurgitation of Heather's origins, the same information that the previous movie labored to explain. Fans of the videogame are likely to be even more disappointed, as Bassett's script directly transposes the plot of Silent Hill 3.

The Silent Hill franchise has always been openly inspired by Jacob's Ladder, Adrian Lyne's feverishly tentacle-happy PTSD freakout, but Revelation forgets to create a reality that it can upend, and so Bassett's free-form terrors simply crash in your face and slip away. The film tries to sustain interest by incepting jump-scares inside of other jump-scares like they're Russian nesting dolls, but the constant barrage of bangs and shrieks quickly numbs the viewer to their impact—Bassett literally can't even cut to a shot of Pop-Tarts emerging from a toaster without trying to make you scream. On the other hand, Bassett refuses to indulge in his film's intriguingly vile creature designs, as only the blind nurse monsters and a spider creature made out of masks are given a chance to shine. And yet, while the Silent Hill franchise endures on the disgustingness of its demons, the most memorable ghoul in this film is... an inanimate wooden chair.

So low-rent and ill-considered that it can't even be helped by a deliciously hammy Malcolm McDowell cameo, Silent Hill: Revelation 3D is the nadir of senseless seasonal cinema. But while Bassett's film struggles to say anything coherently, it gets the most important message across perfectly well: "Do not go to Silent Hill!"