close
Something stupid this way comes 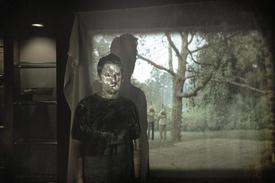 Something sinister could have come out of Sinister, which stars Ethan Hawke as a struggling true-crime writer whose determination to get close to the truth of a grisly murder in a small town puts his family in peril. But Sinister is pretty much everything to hate about modern horror in one mixed bag, a ramshackle teardown of jump-scares and creaky tricks, saw-it-coming "surprises" and the lead-footed thud of inevitability as it tediously places one clumsy foot in front of the other, plodding towards a finale that comes far too late. Horror fans—looking at a limited slate of possible scares and startles in the lead-up to Halloween—will probably give it a brief burst of moneymaking at the box office. But real horror smash hits are made by word-of-mouth, not marketing, and Sinister is hardly likely to get much of the former.

Ellison Oswald (Hawke) is a one-time best-seller whose books on real murders used to stir up sales, but now just stir people up. Looking for a career boost, he moves to a small town where a grisly murder took place when four-fifths of a family were found hanging from a tree in their yard. What Hawke doesn't tell his wife (Juliet Rylance) and kids (Michael Hall D'Addario and Clare Foley) is that he's moved them into the actual house where the murdered clan lived and died. (Any resemblance to the blocked, baffled Jack Nicholson character in The Shining is purely intentional.) Ellison soon finds a box of Super 8 films in the attic, and the most recently dated one shows the actual lynching. Ellison, desperate for success, doesn't call the cops, which briefly fills the film with life. What then helps kill Sinister dead is that Ellison does not immediately watch all of the rest of the films in the box—each of which shows another brutal murder—like any person in that circumstance would. Instead, Ellison chooses to pop in and out from his tasks and watches them piece by piece, spooling up another portrait of murder at random intervals any time the film needs a jolt, which is often.

This doesn't completely murder Sinister, but director Scott Derickson and co-writer C. Robert Cargill make one other fatal error in storytelling. It turns out that a figure can be seen in all the films of murder: a masked creature. And doodles are discovered, showing the murders of the families all attended by "Mr. Boogie," who turns out to be Bughuul, an ancient demon-spirit who lives in, and feeds on, violent images. And who treats the laws of physics like recommendations and cannot be stopped by anything Hawke does. Which is theoretically scary, but in fact boring; if all we're doing is watching meat be shoved into the grinder by a slow hand of inevitability, why should we care?

You can tell that Derrickson or Cargill or someone behind the scenes here loves Michael Mann's Manhunter, the first Hannibal Lecter film, that tracked brutal murders captured in plain "home movies" which a cop deciphers for clues. But there's no human, fallible, comprehensible bad guy here, just a ghoul/God/ghost who makes his own rules, and all the films-within-the-film are good for is cheap scares and tawdry violence. (There's also a visual bit stolen from D.O.A., suggesting that Derrickson and Cargill at least have good taste in terms of what they lift and where they lift it from.) Hawke tries manfully to scare audiences, and James Ransome is nicely-tuned as a local cop who's smarter and stranger than he looks. Still, the slapdash and underbaked Sinister feels like a rushed, straight-to-video sequel to itself—it turns found footage into a lost opportunity. For all of its murders and metaphysics, it's just another modern horror film made by people who understand shock but never suspense.