close
This Bond is shaken, but less stirring 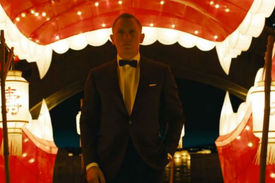 With its beautiful camerawork, tight editing and propulsive plot, Skyfall, the latest in the 50-year-old series of Bond films, seems like a guaranteed moneymaker and a good thing. Still, while director Sam Mendes, aided and abetted by a crack technical team, delivers big-screen action with panache and style, something about this Bond feels a little off. Mendes himself has said that his template for this movie was Nolan's Batman films—and while that makes for a dark and diverting film, it also makes for one that, at times, feels a little too closely-cribbed from the psychodrama and themes of Gotham. Squint at Skyfall and you'll swear you're watching Bruce Wayne. Audiences, already appreciative of Daniel Craig's stand as the new Bond, will endorse Skyfall with rising ticket sales, even if Mendes seems to move the franchise more towards the herd than in its own direction.

The globe-trotting action opens with Bond seriously wounded on a botched retrieval mission against an assassin who has stolen a list of undercover NATO agents as part of an elaborate—in fact, too elaborate—plan to strike at British Intelligence. Bond goes after the mystery actor behind it all, hampered by his own exhaustion, bureaucratic in-fighting at MI6, a villainous genius played by Javier Bardem with majestically bizarre hair, an omnisexual arrogance and enough vengeful insanity to cover up the gaping plot holes. Bardem's Mr. Silva doesn't just want to hurt MI-6—he wants to hurt M, (Judi Dench), his old boss and Bond's current one.

With a script by long-time Bond stewards Neal Purvis and Robert Wade, who've been on the series since 2002's Die Another Day—and credit also given to Gladiator scribe John Logan—Skyfall recycles old Bond elements and adds new elements that, for lack of a less clumsy phrase, feel non-Bond. In The World is Not Enough, Brosnan's Bond also had to do derring-do while slowed-down by a separated shoulder; Sean Bean in Goldeneye was another ex-MI-6 spy with an agenda. There are also knowing nods to the older Bonds from Ben Wishaw's new gadget-man Q ("Were you expecting an exploding pen? We don't really do that sort of thing anymore.") and the return of an old four-wheeled friend.

But the climax, which finds Bond holed up in his old Bond family estate on the blasted heath of Scotland, feels—like the motivations—a little small. Bond is who you send when the world, not the workplace, is in peril, and watching Bond booby-trap his manor feels like a mash-up of Batman and Home Alone.

Shot on digital with dark and lustrous beauty by Roger Deakins, and edited by action ace Stuart Baird, Skyfall is gorgeous and fleet. Craig maintains a nice tone—he's always gotten to the crux of Bond as Her Majesty's Legbreaker—and Bardem's flickering between homicidal rage and loopy annoyance is amusing. But while I don't demand shark-pits and cat-stroking, I do hope for a little more ambition in my Bond baddies, and his plan—and the film's plot—forces audiences to accept that he is both insanely competent and completely insane. Part invigorating shot in the arm and part midlife identity crisis, Skyfall is less a great Bond film than a generically good big bold blockbuster.