close
This AA dramedy is sobering, smart and sweet 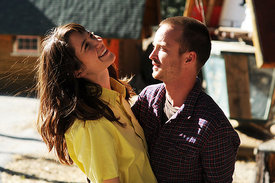 In Alcoholics Anonymous, there is a saying: "When wallowing in your self-pity, get off the cross—we need the wood." In Smashed, director James Ponsoldt's modest character piece, self-pity—along with the histrionics that often accompany it in these types of dramas—is so tactfully avoided that humility becomes the source of the movie's power. Mary Elizabeth Winstead, previously employed as eye candy in Scott Pilgrim Vs. the World and Abraham Lincoln: Vampire Hunter, is the emotionally accessible, unaffected center of this story of one woman's battle with alcoholism and equally pitched battle with recovery. Careful tending of such a serious-minded, but not depressing, film should net respectable returns thanks to younger adults who'll connect with Smashed's humor and lack of preachiness.

Working primarily with handheld cameras in LA locations that emphasize the dusty doldrums of lower middle class life, Ponsoldt (Off the Black) plunges into the world of pretty brunette Kate (Winstead) and her writer husband Charlie (Aaron Paul of TV's Breaking Bad). They're energetic young marrieds, shooting pool, riding bikes and singing karaoke, all under the influence of an intoxicant that may be the main thing they have in common. Ponsoldt initially presents the couple as a fun-loving pair who we can imagine being our friends, then ups the stakes when Kate takes a mighty swig from her flask and then walks into the classroom where she teaches first grade. Shooting Winstead in close-up, Ponsoldt gives Kate nowhere to hide as she vomits in front of her students, lies that she's pregnant and then enjoys a night of boozing, crack smoking and waking up God knows where. Soon after, the vice principal of Kate's school (Nick Offerman, Parks and Rec), who is nine years sober, suggests she join his AA group (which includes Oscar winner Octavia Spencer). It is, of course, inevitable that Kate will stand in front of a group of strangers and admit she's an alcoholic. What's surprising is she starts her journey to sobriety about 20 minutes into the story. In this wise and knowing screenplay by Ponsoldt and Susan Burke (herself a recovering alcoholic), acknowledging the problem is not the crux of the drama. It's Kate coming to the painful, slow-dawning realization that if she's going to live without alcohol, she may have to jettison the lifestyle, and loved ones, that enabled her addiction.

As alcoholic movie characters go, Kate is about as authentically modern and unadorned as you're ever likely to meet. Had the part been played as Oscar bait, it would have been disrespectful to the role and substantially less effective. Winstead's expertly calibrated reading of Kate deserves to boost her industry profile, although she and the movie would have benefited if her husband was as full-bodied a character instead of serving mostly just to move Kate's story along. Still, even in the broad strokes, Charlie's behavior is spot-on. His attitude towards Kate's AA involvement is, at best, casually unsupportive (they'll become "wine with dinner people," he figures) as he continues to drink, party and hang out with his idiotic buddies. With each sober month, their marriage shows the strain.

Other family members are also unhelpful. In a revealing and well-played scene, Mary Kay Place cameos as Kate's bitter, kooky mother and the fount from which Kate's addictive tendencies sprung. She serves to further isolate Kate who, almost from the beginning, knew something was wrong and understood that drinking "leads to every stupid thing I do." Indeed, Smashed would have been just another grandiloquent addiction melodrama were Kate not so grounded and self-aware. For that, credit goes to Winstead, making choices that are unglamorous and subtle. She never asks for our sympathy, so we give it to her willfully. Kate is committed enough to generate a respectable tailwind on her path to sobriety, but that only creates a new set of problems, especially when her pregnancy claim comes to a devastating head. In fact, you can argue that Kate being an alcoholic is incidental. Smashed is really about overcoming the obstacles that get increasingly allied against you after you've made the decision to turn your life around, whatever the issue. The tragedy here is that unlike the oblivious drunk, recovering alcoholics have the indignity of being fully aware of their pain.

Alcoholic movie characters run the gamut from lovable millionaire (Arthur) to Skid Row bum (Henry Chinaski from Barfly) to all-out, suicidal depressive (Ben from Leaving Las Vegas). As written and performed, Winstead's Kate triangulates between all these approaches and finds a sincerity that plays to the intellect, not to the rafters. Smashed culminates in an ambiguous final scene (ending, ironically, with a blackout) that concedes a lifetime of temptation for the newly sober, especially if they can't let go of whatever enabled their problem. Or, as they also say in AA, "Sometimes the hardest decision in life is which bridge to cross and which one to burn."