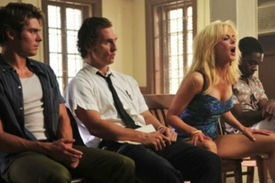 How can the courts be sure only guilty men are sentenced to death row? It's simple, says inmate groupie Charlotte Bless (Nicole Kidman): their favorite sexual position. Such is the logic—and the fixation—of The Paperboy, Lee Daniels' engrossingly gonzo melodrama about a murderer, the woman who loves him, and the boy who loves her. Because alleged killer Hillary Van Wetter (John Cusack) prefers, ahem, receiving to giving, Charlotte is convinced of his innocence, and not only agrees to marry him, but also enlists reporters Ward (Matthew McConaughey) and Yardley (David Oyelowo) to prove the truth. Along for the ride—literally, he's their driver—is Ward's much-younger brother Jack (Zac Ephron), a college flunkie who becomes as sexually obsessed with Charlotte as Daniels is with his entire cast. Daniels was nominated for a Best Director Academy Award for Precious, but it's this goofy escapade that actually proves he has talent, especially when drawing emotionally (and physically) naked performances from his actors. The Paperboy's polarizing debut at Cannes will make audiences trickle in to watch "the movie where three-time Oscar nominee Nicole Kidman pees on that kid from High School Musical"—and half of them will spend it smothering their giggles—but this is a curio that demands to be seen.

Our story is set in '70s Florida, a hotbed of tanned skin and free love rimmed by primitive swamps where men machete gators just like their grandpappy did 50 years ago. Last decade—Daniels makes sure you can tell it's the past by shooting the sequence in black and white—someone gutted the sheriff just after he creeped on a couple boning in their car. Everyone hated the cop, but the town erected him a statue anyway and sentenced local yokel Hillary (an unnerving Cusack) to death for the crime. Enter Charlotte, a force of disco-era feminine wiles in her gold polyester pants and bleached blonde wigs. ("I think straight hair gives me class," she preens.)

Charlotte is a self-important romantic who sees herself ennobled by Hillary's love. She beams when he calls her his angel, and brushes it off when he calls her his bitch. The first time Hillary and Charlotte meet in person during prison visiting hours, she's flanked by her two reporters and Jack. But that doesn't stop her from bringing them both to climax just from heavy breathing and eye contact. The scene is an uncomfortable show-stopper made even more awkward by the way Daniels sniffs around his actors like a dog. Not only does he sees no shame in zooming in on the wet spot on Cusack's jeans and the by-proxy boner in McConaughey's pants, he even squeezes so close to Kidman's panties that I noted her pubic hair was historically inaccurate.

Why would Nicole Kidman say yes to this mess? Who knows, but it's good she did. For 15 years, directors have treated Kidman like she's made out of marble. This is the first film since To Die For to give her a pulse, and the more over-the-top she gets, the more her years wandering the desert in search of another Oscar feel like a waste of her wicked comic timing. As Charlotte, Kidman is so darkly tanned that she's one beach day shy of melanoma, and when she stalks across the frame, she holds her arms akimbo like a wrestler while her miniskirt wiggles dangerously close to over-exposure. Like her sexual hold over Cusack and Efron, she threatens to devour the audience. But Kidman's held in check by McConaughey's restraint. Ward is merely bemused by Charlotte's chaos, and his distance reminds us that she's a wackjob in his world, too.

Still, Paperboy belongs just as much to Efron, a former TV heartthrob who's maturing into a fine actor. Now 24, his pretty boy face has that Marlon Brando softness which almost always thickens into fat, and Daniels' camera lingers over him like a ripe fruit. His Jack is an over-confident brat, but his agony over Charlotte is as real and bizarre to him as it is to us. In one scene, we see him reading Lolita like he's looking for proof that he's not the only man with an obsession that's beyond sanity and logic, and definitely beyond age limits. And as his maid and family friend, singer Macy Gray is great. Her oddly casual way of delivering dialogue makes her a compelling and unaffected screen presence—she seems at once from outer space and more earthbound than every pedigreed performer in the frame. Directors besides Daniels and his popcorn counterpart Tyler Perry need to give her more chances to act.

Daniels is a nutcase and almost definitely a perv. But he's gifted at getting actors to drop their guards and commit to nonsense. No other auteur would have dared cast Joseph Gordon-Levitt and Mo'Nique as lovers, which Daniels did in 2005's outrageous Shadowboxer. (To their credit, they nearly pull it off.) And the raw rage he pulled from Mo'Nique in Precious won her an Oscar—her fury made audiences forget that the film itself was piffle. He's unintimidated by his actors and fearless in his own goals. When Clint Eastwood enlists an Oscar-winning actress to make a period piece about a murder, the result is 2008's handsome and bone-dry Changeling. By contrast, Daniels punctures his story's vintage veneer, smearing his cast with fake Florida sweat and commanding them to stare at each other's asses when they're standing bored in the margins of the screen.

The Paperboy is definitely memorable. But is it meaningful? If you give Daniels the benefit of the doubt, he's made a passionate film about the most passionate thing of all: infatuation. And like infatuation, The Paperboy is hot-blooded and sloppy, both so embarrassing it should be hidden it away, and so bold it deserves to be brandished. If you love love—or at least love ambition—this is a movie you have to see. But if not, you're forgiven for agreeing with McConaughey when he's finally so worn down by the drama that he collapses on a toilet and shrugs, "I can't see the point of it."