close
This arcade comedy is worth every quarter 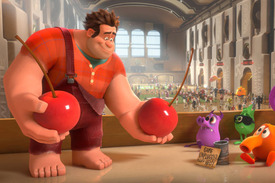 Taking a page from the enormous success of Pixar's Toy Story franchise, Disney Animation has once again made magic from childhood obsessions, this time with a group of video arcade characters that, while wildly different from Woody and Buzz Lightyear, should have the same success with family audiences. The titular star Wreck-It Ralph is the bad guy of a videogame called Fix-It Felix, in which every time someone puts in a quarter, Ralph—a giant, hot-tempered destruction derby of a dude—must destroy a building before losing to the good guys. Tired of being bad, he decides to become a hero, which sends the whole arcade and its inhabitants into crisis mode. Disney has a winner with this laugh-out-loud cartoon that's loaded with great characters, heart and humor, and an appeal that should draw in both families and a slightly hipper movie crowd who digs the retro nostalgia in a flick with a Q*Bert cameo. Once word gets out, Wreck-It Ralph should be on its own destructive course to smash its rivals for the big holiday family box office bucks—and consider it a force in the Best Animated Film Oscar race.

Things get off to a roaring start at a 12-step meeting called Bad-Anon for the various villains of the video game arcade, including Bowser, the fireball-flinging dragon of Super Mario Brothers, and one of Pac-Man's killer ghosts. Ralph (John C. Reilly) confesses to the group that he's tired of constantly being the bad guy and tearing down the apartment building in his game, much to the loathing of the inhabitants who think he's public enemy #1, but bow at the feet of Fix-It-Felix (Jack McBrayer, the repair guy who puts it all back together. Wanting to earn the respect of the building's tenants known as the Nicelanders, Ralph decides he needs to change his image, and so he travels through the arcade's wiring to Game Central Station where he invades the first-person shooter Hero's Duty, a game where he can win a medal for bravery. But soon after he signs on with tough Marine-style Sergeant Calhoun (Jane Lynch), the film takes a right turn into a very different kind of world when he inadvertently crashes a spaceship into Sugar Rush, a candy-coated car race extravaganza where he comes up short against the spirited Vanellope von Schweetz (Sarah Silverman) and the giggly King Candy (a wonderfully voiced role by Alan Tudyk), and some dangerous killer Cy-Bugs who've also slipped out of Hero's Duty and threaten to destroy the arcade.

Executive Producer John Lasseter is the man behind Toy Story, and it shows. Ralph is a worthy successor to that hit franchise, and on many levels, this cartoon takes moviegoers into brand new animated territory. With a smart, hilarious script from Phil Johnson and Jennifer Lee and superior direction from first-time feature maker Rich Moore (The Simpsons), Disney has energized the form with a fresh team and a smart concept. It's all very frenetic, colorful fun and so cleverly conceived and executed that you can't help but fall prey to its considerable charms, chief among them the fantastic vocal work of Reilly and Silverman. Wreck-It Ralph might not only be the most entertaining animated film of the year, it's also the funniest comedy of 2012 and worth every quarter of admission—including the ones you'll spend afterwards at the arcade.