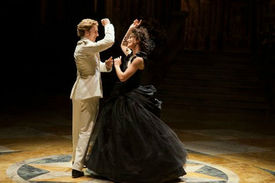 A feverishly deft and dazzling feat of adaptation, Joe Wright's Anna Karenina takes Leo Tolstoy's epic tragedy of lust and death during the fall of the Russian oligarchy and crams it into a snowglobe, confining much of the tale to a single soundstage where he visibly shifts the scenery with the fluid logic of a Broadway musical. The result is a masterpiece of moving pieces, a dizzying and obscenely beautiful film that boils down Tolstoy's text to its most basic elements by making literal the theater of high society. Anchored by Keira Knightley's implacable turn as the titular heroine torn between two men, Anna Karenina will draw discerning audiences, and could prove a slow and steady awards season success if viewers can appreciate—and see beyond—its technical genius.

Could 2012 be the year when people finally and forever abandon the notion of the "unfilmable" novel? From the temporal Cuisinart of Cloud Atlas to the feral elementalism of Andrea Arnold's Wuthering Heights, some of this year's most rewarding and audacious films have savaged great literature to make good cinema, breaking their books apart at the spine and reassembling them with a new set of tools. Of course, the movies do this every year—skeptics never catch on that it's one of the things that the movies do best. "How did they ever make a movie of Lolita?" was that film's famous poster tagline, but Kubrick promptly answered the question. In the 50 years since, we've seen a cheeky 94-minute Tristram Shandy, a festering Naked Lunch, and a massive Lord of the Rings trilogy that grossed nearly three billion dollars. We've seen John Huston tangle with James Joyce, and Raúl Ruiz distill the dense Marcel Proust into a seductive portrait of living memory. The cinema has always thrived on threats of impossibility, but Anna Karenina is a convincing argument that we're finally at the point when calling a book "unfilmable" is more about your limitations as a viewer than of the format.

The violence is almost entirely inside Anna's heart. Yet even without a duel, Anna Karenina has proven irresistible to filmmakers—it's been reshaped for the screen 12 times (three of which during the silent era). Unfortunately, those movies only shrunk and domesticated Tolstoy's text, while their characters were all but swallowed by their costumes. Historically, trying to turn Anna Karenina into a film is kinda like trying to Instagram The Great Wall of China—not even that sepia filter can save you.

But Joe Wright has built a career on reconfiguring difficult novels for the screen. Pride & Prejudice and Atonement were well received, but Anna Karenina makes them look like trial runs. His genius idea is to go big: it's frenetically maximalist with the sets flagrantly sliding in and out of view with such precision that Tolstoy's Russia is reborn as a Rubik's Cube of opulent design. Someone opens the rear door of a piano room and steps onto an ice rink. Anna's boudoir transforms into the back of a carriage as she opens the curtain to see the Russian countryside roll by. Meanwhile, Dario Marianelli's beautiful Slavic score turns the ambient clatter of bureaucrats into a symphonic arrangement, not unlike the way his music lilted out of little Briony's typewriter in Atonement. Among all this perpetual transition, Anna's greatest need becomes stasis—she struggles to stay in the moments she's sacrificed so much to enjoy. Tolstoy's novel is a transitional text that bridged the gap between realist and modernist novels, and Wright's film (which bridges the gap between Dr. Zhivago and Moulin Rouge!) so fluidly embodies that sense of flux that it's the most accurate Anna Karenina possible.

Tom Stoppard's witty script understands that Anna Karenina isn't a romance so much as a cautionary tale, and Wright's artifice prevents the audience from getting too close to its doomed heroine. The distance reflects and exposes Anna's narcissism—unlike previous versions, it doesn't meekly submit to it—and the sweet parallel romance between two far less-glamorous types, Levin (a perfectly earnest Domhnall Gleeson) and Kitty (Alicia Vikander), is given its rightful due as the story's beating heart, rounding out the novel's core maxim that "No one can build their happiness on another's pain." Unlike Anna's constrained and scrutinized small world, the moving Levin sections escape the suffocating Shepperton Studios set and eventual ease into an open and pastoral vibe. And Levin and Kitty's swoon-worthy romance is a blast of warm air during the film's home stretch, when the pace slows in order to strand Anna in the mess she's made (and to save your eyes from glossing over from the constant barrage of wild stimuli).

All the same, Wright's commitment to the ABCs of his approach ("Always Be Crescendoing") makes it difficult for the finale to land with impact, instead doubling down on the idea that Anna's drama is of her own design and for which she herself is the ultimate audience. Keira Knightley more than meets the challenge of this supremely demanding role—the actress' fierce loyalty to her character sells Anna's most damningly selfish moments, her resolve allowing the movie to comfortably straddle the line between florid melodrama and Synecdoche, St. Petersburg.

A bold and borderline insane adaptation that anoints Joe Wright as a modern filmmaker who reveres the old guard, Anna Karenina is a bracingly fresh experience. The film's mesmeric technique builds substance from style and reshape Tolstoy's epic novel into its first purely cinematic incarnation—it's a genuine adaptation in a world that's been overrun by photocopies. Anna Karenina doesn't quite push movies forward, but it'll remind you just how far they can go.