close
It's a scream 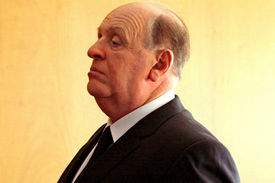 The making of the 1960 classic Psycho is deftly weaved with a touching look at the personal and professional partnership of Alfred Hitchcock and his wife Alma in a flick that should please aficionados of the Master of Suspense and audiences interested in a unique love story that stood the test of time, despite Hitch's fixation on affairs, lies and murder. Films about filmmakers and stars have a spotty box office track record but riding on superlative performances from Anthony Hopkins and particularly Helen Mirren in the key roles along with a sparkling Scarlett Johansson as Janet Leigh, Hitchcock should enjoy some decent business from specialty venues during the holiday season. Plus, it can count on the continuing fascination with Psycho, one of the all time great movies, to generate even more goodwill. Awards attention will be needed to push the film any further, but both Hopkins and Mirren are good bets for a nomination.

Based loosely on critic/film historian Stephen Rebello's exhaustively researched and massively entertaining non-fiction account, Alfred Hitchcock and the Making Of Psycho, the movie chooses to zero in on the unique relationship of Hitch and wife Alma, a tough and sharp film expert who basically discovered him early in his career. Alma forever quietly worked behind the scenes as the brains of the duo, and she's one of the key reasons this master director had the kind of career he did—and in return, she's barely remembered. The film starts with Hitchcock looking to radically change direction after turning out yet another glossy hit, North By Northwest in 1959. He seizes upon bringing the risky Robert Bloch novel Psycho to the screen as a low-budget black and white thriller in which leading lady Janet Leigh would be killed off just a third of the way through the film. But everyone else thinks he's gone nutty. And during shooting, Hitch not only faced studio indifference and the perils of self-financing, but intense jealousy due to his wife's "professional" relationship with writer Whitfield (Danny Huston).

Whatever the truth of his wife's association with Whitfield—and of Hitchcock's admitted obsession with his own leading ladies—the suspicion leads to a showdown where Alma lets Hitch know in no uncertain terms what it is like to be in his shadow. It's a killer moment, the most honest in the film, and Mirren knocks it out of the park. She brings life and gravitas to director Sacha Gervasi's retro tone. The rest of the film chronicles how the film was an initial flop. The only reason we remember it today is because Hitchcock and his beloved expert Alma got to work reediting it, with Alma's contribution going uncredited.

Gervasi gets under the skin of these iconic and now, beloved figures with no small thanks due to a superlative cast led by Hopkins, who is obviously having such a great time channeling Sir Alfred that he succeeds even though the resemblance isn't always 100%. Still, even he is upstaged by the sensational Mirren, whose Alma sounds the war cry for all those unappreciated "plus ones." Johansson niftily underplays Leigh, walking the line between playing a well-liked star and the role of her career, Marion Crane. Huston is fine as the man who comes between Alma and her husband, while there is also nice, amusing work from Jessica Biel and James D'Arcy as Psycho co-stars Vera Miles and Anthony Perkins. Special kudos to Michael Stuhlbarg as Hitch's agent Lew Wasserman and all the fine craftsmen and women who bring pure movie magic to the magic of making movies, including Danny Elfman's aces score that not only recalls Bernard Herrmann's classic Psycho soundtrack but underscores the real-life human drama at the heart of this very fine Hitchcock. A "Good Evening" indeed at the movies.