close
Spare us a Cuban version in 2040 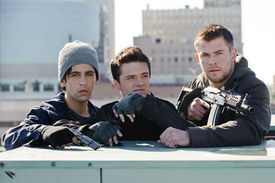 As with any mediocre '80s movie that retains a small ironic foothold in contemporary culture, remaking John Milius' Red Dawn was inevitable. A gun-stroking orgy of jingoistic Cold War carnage starring a gaggle of Spokane teens fighting back the Soviet forces who've invaded their hometown, Milius' original film plays like an unholy cross between Battle of Algiers and Gleaming the Cube, streaked with scarlet paranoia and sticky with misspent testosterone. A few years ago, someone who hates money decided that this NRA fairytale was ripe for an update, proving that even alternate histories are doomed to be repeated. The only problem? The Cold War is over. The scariest threat Russia poses against the Western world is Timur Bekmambetov. But this is America, where logic and a healthy respect of foreign nations are seen as mere obstacles to our destined glory, where—in the spirit of Thanksgiving—we'd sooner settle than surrender. Why devise a new premise when you can just plug in a new enemy? And so, nearly four years since it rolled cameras, the sun rises on another Red Dawn, which supplements the irresponsibility of the original with an incompetency all its own.

The most important thing to know about this new version of Red Dawn is that none of the people involved realized that China wasn't the ideal enemy nation until its disastrous post-production, which delayed the film for two years and made it the Heaven's Gate for the Hunger Games generation. Transcripts from that pivotal meeting have yet to be publicly disclosed, but one imagines that it went a little something like this:

Studio Executive: "In retrospect, it was probably unwise to make a $70,000,000 action movie that baselessly vilifies the planet's largest country, which also happens to be one of our most important international markets. If only there were another communist nation nearby... perhaps a mysterious hermit kingdom that arouses worldwide interest at the slightest move. And—I'm just spitballing here—but wouldn't it be neat if that country were loathed around the globe, and governed by a dictatorship that didn't even allow its people the opportunity to see rancid xenophobic dreck like ours? [long pause] We've made a huge mistake."

And so, after being shot in 2009, originally scheduled for release in 2010, and then delayed by the implosion of MGM, Red Dawn finally arrives in theaters with its Chinese villains digitally altered to North Korean. Of course, the only thing more damning than such an embarrassing oversight is the fact that so little of the film had to be altered in order to make this seemingly pivotal adjustment. Even in its originally intended form, this new Red Dawn was so generic that the defining characteristic of the film's antagonistic force could be changed with CG.

Directed by accomplished stunt coordinator Dan Bradley, Red Dawn surrenders any hope for relevancy during its hilariously alarmist opening montage, in which Rush Limbaugh's fever dreams cohere into newsreel footage charting Kim Jong-Un's rise to power. While the North Korean regime remains a clear and present danger, the obtusely alarmist tone of the credits sequence feels like more of a glimpse into an alternate universe than it does a credible one.

Nevertheless, there can be no denying that Dan Bradley's film understands "AMERICA!" As soon as the credits are over we're dropped into the middle of a high school football game that's just like Friday Night Lights, but purged of all those weird normal-looking people. Matt (a woefully miscast Josh Peck, who delivers every breathy line like he's about to ejaculate) is the quarterback for the losing team, which loses because he is a loser and deserves to be occupied. Loser. Watching from the sidelines is his older brother, Jed (Hemsworth), who has just returned from serving in Iraq (or maybe they'll just dub in "Afghanistan" for the public release). Matt has some dumb, completely interchangeable friends (like Hunger Games' Josh Hutcherson, and Tom Cruise's Connor Cruise), and a crush on brainless sex object Erica (Australian model Isabel Lucas, who must look like a convincing girl next door to someone who lives next to an airplane hangar where they shoot Victoria's Secret commercials). A guy wears a Dinosaur Jr. t-shirt, because some things truly are timeless. The next morning, the Asians invade.

To Bradley's credit, his experience with action sequences is readily apparent during that pivotal first act siege, in which a phalanx of fighter jets suddenly materialize out of the blue morning sky. The scene lands with a severe jolt, and not only because the film has already lulled you into a stupor of mediocrity. Bradley arranges car wrecks like Steve Reich arranges notes, a symphonic refrain of crunching chassises instilling a sense of upheaval that Red Dawn is completely incapable of maintaining once it strands its boy band militia in the woods with a stockpile of machine guns. From there, the film devolves into a meathead mush of firefights and shouting matches—the boys make day trips into the city to blow stuff up and yell things like "Rendezvous with Douche Company!" but no attempt is ever made to convey the methodology behind their missions, or even how the North Korean occupation works. Further enervating the experience is the movie's completely unstable sense of time, breathlessly paced but always lost in the woods. Not since The Truman Show have we seen characters so blatantly stunted by studio interference.

Naturally, any sort of deeper political commentary is also lost in the fire. One of the few North Koreans with a speaking part says something about freeing Americans from our corporate overlords, an idea that Red Dawn never probes beyond its gobsmacking insistence that big business is the ultimate expression of Western liberty (a Subway sandwich shop stays open during the occupation, replenishing our boys in their time of need). Red Dawn's conclusion is insultingly abrupt in its attempts to absolve itself from answering any outstanding questions, but the whole thing is too shoddily slapped together to inspire anything more dangerous than an over-inflated sense of the original film's quality. At least the platitudes are harmless enough, like Jed's key maxim: "We inherited our freedom, now it's time to fight for it." The only problem—on screen and off—is Red Dawn's "Shoot first, determine who the enemies are later" approach, the country-swapping that smacks of crass opportunism, lazy writing, and offhand xenophobia. There's not enough CG in the world to disguise that that's the real threat.