Rise of The Guardians 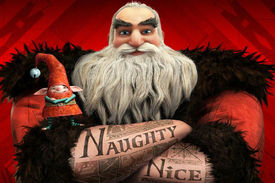 Rise of the Guardians boasts a premise you're amazed no one thought up before—uniting holiday icons and childhood folklore figures Santa Claus, The Bogeyman, the Tooth Fairy and Jack Frost. The final film has not just an irresistible pitch, but, even better, superb execution. With a top-notch voice cast including Alec Baldwin, Chris Pine, Isla Fisher and others working in concert with top-notch animation from the DreamWorks creative and the helping hands of luminaries like director Guillermo Del Toro and cinematographer Rodger Deakins, Rise of the Guardians is one of the best kid's films of the year, full of delight and action and charm and comedy. It lacks aimed-at-adults pop references normally see peppered in films like this, and that's a good thing. These days, the idea of an animated film just for kids feels like the exception more than the rule. With its big heart—and its big cross-marketing push stretching from books to burgers—Rise of the Guardians will do well at the box office with kids, who will enjoy its mix of dramatics and delight, comedy and 3D spectacle.

Based on a story and saga by William Joyce (Robots, Wilbur Shrinks), Rise of the Guardians suggests that the Tooth Fairy (Fisher), Santa Claus (Baldwin), the Easter Bunny (Hugh Jackman) and the Sandman (a silent, beaming beach-blonde Buddha who speaks in sand-shapes) each, individually and collectively, conduct their tasks as they guard the world's kids. When their old nemesis the Boogeyman, aka Pitch (Jude Law), moves to wipe out children's belief in the Guardians (which would, by extension, wipe them out) the Man in the Moon sends them a new guardian, Jack Frost (Chris Pine), to help in their fight. But this Jack is cribbed from the Jason Bourne playbook, which means he has to figure out his own unknown past, as well ...

Comic-book movie aesthetics and sensibilities are leaked into all genres of film from Guardians to Twilight: Breaking Dawn - Part 2. Fortunately, the blend works far better here, as a Hallmark Justice League of personas and powers clash with Pitch's plans. While David Lindsay-Abiare's smooth, clever (but never too-clever) script and Ramsey's direction deserve great credit, attention must also be paid to the contributions of author and illustrator (and producer) William Joyce, whose pen and pencil and imagination managed to find fun and new spins on familiar names in both the character animation and in the characters themselves. Baldwin's Santa (who is also, regrettably, the least-smoothly animated of the group) is a bearded, bellowing mock-Russian; Fisher's Tooth Fairy is an iridescent mix of human and hummingbird, flitting busily through her tasks. Pine, as our amnesiac everyman hero in a casual hoodie, provides a nice human center to the supernatural goings-on.

With Skyfall cinematographer Roger Deakins aiding the animated "camerawork"—as he did on the superlative -How to Train your Dragon—there's beauty and heft to the film's CGI visions. One or two of the action sequences may be a bit too swift or crowd to follow, but there's also unexpected moments of grace like a CGI snowfall, or the awe-inspiring whimsy of an army of creatures made of dream-sand moving, huge and fantastic, through slumbering suburbia. Rise of the Guardians isn't the year's best animated film—that honor is still held by Wreck-It Ralph—but it is, more impressively, the year's best animated film for kids, a necessary and real distinction in an age when Pixar and its imitators try to bat high for the grown-ups, bunt on entertaining the kids, and all too often let both constituencies down. Rise of the Guardians may not be as smooth or assured as other 3D animated films, but I'll take its well-meaning fun and fantasy any day over the gorgeous-but-hollow antics of Madagascar 3 or the flowing, flame-red hair of the gorgeous-but-rote Brave. Grown-ups can worry about frame-rates in animation or if ticket sales will justify a Guardians 2, but kids will watch Rise for its nicely-tuned mix of gentle spirit and zesty storytelling, enjoying its on-screen pleasures in the moment and leaving the theater inspired more to dream than to buy.