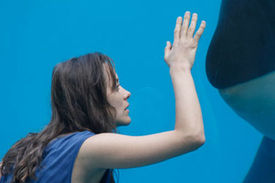 After the sharp, smart and stunning prison drama A Prophet, Jacques Audiard steps into the sunshine (or so it seems) for his new film, Rust and Bone. Ostensibly a romance between tough-and-taciturn Ali (Matthias Schoenaerts) and tested-but-strong Stephanie (Marion Cotilliard), what Audiard has created here is nothing less than the rare combination of high art and beautiful filmmaking with visceral power and gut-level emotional reality—it's like a symphony of fists, or a brutal assault by angels. The pain and beauty of life are one, and every chance for redemption comes with a new chance to make mistakes. With distribution from Sony Pictures Classics, expect an avid audience of cinephiles to head to the theaters, boosted a little by Cotilliard's rising internationally-known name. In a perfect world, Rust and Bone would earn every award—and every dollar—people are proposing for the lightweight, Hollywood-happy overblown sitcom Silver Linings Playbook.

In a last-ditch effort to flee his old life and start again, Ali brings his son Sam (Armand Verdure) from Belgium to the sunny south of France, crashing with his sister Anna (Corrine Masiero). He finds work as a bouncer and one night, meets Stephanie by saving her from a fight after she's gotten a bloodied nose. Their first meeting is awkward, where he leaves his number, and she doubts she'll need it. But after an accident at the marine park where she works leaves Stephanie with a very different life, she, in the long months of her rehabilitation, reaches out to Ali. And he picks up when she calls.

At first, Stephanie appreciates that Ali lacks any pity for her plight, his brawny directness literally dragging her out into the sun, out into the surf, back to life itself. But not long after she and Ali become bedmates—not exactly a couple—she soon realizes that Ali's lack of pity for her is part and parcel of the way he feels (or, rather, doesn't feel) about everything, with him fitting her in between raising Sam and other lovers and doing part-time security and taking part in illegal bare-knuckle brawls.

As a piece of moviemaking, Rust and Bone is unequivocally one of the most artfully shot, yet strikingly direct films of 2012, one that uses the language and potential of film to shape not just visions but also scenes. A moment where Stephanie goes back to work and has a brief meeting with an old co-worker—one of the park's Killer Whales, still responding to her hand gestures through the glass—is both visually stunning and layered with emotion. The effects magic used to convey Cotilliard's post-accident life is both impressive and only occasionally stiff and phony, and the cinematography, editing, score (by Alexandre Desplat) and soundtrack are all excellent. In an age of Hollywood movies that feel made to be watched on planes or between commercials, something as stark and lovely as Rust and Bone—a truly composed and contemplated work of cinema—stands out as clean and stark and messy, like the clean, white tooth that spins and skitters on the craggy asphalt during a quick cutaway from one of Ali's illegal brawls. Film is an illusion. But truly great film—and Audiard is a great film maker—creates a physical reality, where you feel things you could not possibly feel, and conveys that rare, tactile real-world immersion into the magic of movies.

Love, they say, conquers all. If you think about it, that's as much a warning as a promise, and Rust and Bone understands how life means pain, and how life can make pain into something more, if you let it. Everyone in Rust and Bone is wounded, and no one has a relationship predestined to end with hugs in time for the credits. In an Oscar season full of films offering sepia-toned homework, the lovably "mentally ill," and singing revolutionaries facing down baritone bourgeois, a movie as flinty and superb as Rust and Bone stands alone as the real deal. Honest but never cruel, and striving for redemption while showing what agonizing work that takes, Rust and Bone is a must-see drama that will reward moviegoers who are both smart enough to seek it out and grown-up enough to take it.