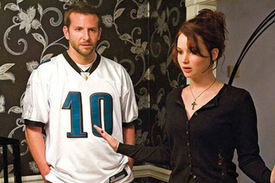 It's easy to imagine what the comedy/drama Silver Linings Playbook would have been had David O. Russell not directed it. Visualize a lead soufflé of shrill bickering, trailer-ready one-liners and brightly-colored inevitability and you'll be in the ballpark. With Russell helming as well as adapting Matthew Quick's 2008 novel, results are weightier, although we never shake the feeling that he's struggling to bend mainstream source material to fit his idiosyncratic sensibilities. His solution is barely workable: embrace the elements that play to his strengths and take his chances with the remaining mountain of contrivances. The ill-fitting final product has been short-listed for Oscar contention, Lord knows why. Some of that delusional awards chatter revolves around Bradley Cooper, who tamps down his beer-and-bros handsomeness to play Pat Solitano, a Philadelphia-area head case with rage issues. But if anyone deserves an award, possibly a Purple Heart, it's the ever-impressive Jennifer Lawrence as Pat's equally damaged friend. As for Russell, his dubious achievement is turning conventional parts into an occasionally unconventional whole. It's not much, but adult audiences starved for mature entertainment should be counted on to investigate this flawed, if admittedly heartfelt, work.

Industry buzz aside, Cooper and Lawrence won't be following in the footsteps of Christian Bale and Melissa Leo, who both won Oscars for Russell's last film, The Fighter. But taking the long view, Cooper will benefit greatly from Russell's guidance. The Hangover star has Robert Redford's handsomeness, yet very little of Redford's studied thoughtfulness. With Russell's help, Cooper is starting to get there. In the early goings here, Cooper is more in his element, when Pat is a bi-polar mass of misplaced focus and filterless fury. He's just served eight months in a mental hospital after catching his wife, Nikki, having sex with a co-worker and then beating the guy senseless. The post-institutionalized Pat insists on putting a positive spin on everything so his first order of business upon returning to his parent's Ridley Park home is reuniting with his philandering wife. The search for Nikki takes him to a dinner party where he meets Tiffany (Lawrence), a fellow pill-popper who's been soothing the pain of her husband's death by sleeping with every man in town. Pat is poised to be next on her list until he flashes his ring finger, proclaims himself still married and spurns her advances. Soon, she makes him a new offer: she'll help him reconcile with Nikki if he'll team up with her to compete in—we're not kidding—a local dance contest.

If the movie is going to define its two main characters by their mental illnesses, it has some responsibility to make their problems medically authentic and dramatically necessary, even in the context of light drama. Tiffany's problems are easier to buy because they're not pitched so high. Pat's level of personal dysfunction, including extended institutionalization and Hulk-like rages, is a little much. It's played for neither broad comedy nor serious inquiry. It's just not very believable, although believing that Pat's truly troubled is key to our caring about him. It only works when you consider how actors love playing these types of characters. Here, it gives Cooper something to explore and his performance walks a tricky line: Pat is uncouth and his behavior can be charitably described as erratic, yet the firmness of his principles and his desire to right his personal ship are never in doubt. As for Lawrence, she's just so darn wonderful. Fierce and present throughout, her gift is making Tiffany's vulnerable, foul-mouthed, yearning, seething behavior feel like it's coming from the same person. All the more impressive when you consider that Tiffany's purpose in the movie isn't to fall in love with Pat. It's to make Pat fall in love with her, something she achieves by relating to him on his own neurotic wavelength and, of course, busting out sexy dance moves that redirect his attention from his troubled past to his promising future.

Russell is a director who likes his family conflict intense and credible. It was certainly so in The Fighter and he uses a similar approach here. He and cinematographer Masanobu Takayanagi work in tight, over-the-shoulder shots that trap us in the heated confines of the Solitano family living room, where it takes only moments to see who's responsible for Pat's dysfunction. Pat Sr. (Robert De Niro) has a temper so violent, he's no longer allowed in the stadium to watch his beloved Philadelphia Eagles. He's superstitious, OCD and clings to the naïve, almost melancholy idea that his son's problems would disappear if only he'd watch the Eagles on TV with dear old dad. In playing Pat Sr., De Niro throttles back on the smirks and side glances that have become his go-to mannerisms. He actually looks vaguely interested in acting. In fact, this is one of his best recent performances, at least when judged against the dozens of crappy movies he's made over the last 20 years. Jacki Weaver, on the other hand, is saddled with the underwritten role of Pat's mother. The Sydney-born Oscar nominee (Animal Kingdom) still manages to sketch a lovely portrait of a caring, passive wife who prefers everyone just get along and enjoy her "crabby snacks and homemades."

Most of the way, the film's deficiencies are survivable if only for Jennifer Lawrence and some fleeting moments of emotional clarity and bracing conflict. When the homestretch begins to buckle under the weight of convention, things go downhill fast. De Niro looks Focker-esque as Pat Sr. escorts his son to the Eagles game where, natch, a huge fight breaks out. And the climax simultaneously answers not one, but two, trite and obvious questions: will Pat Sr. win the bet that'll allow him to fund his cheesesteak restaurant? Will Tiffany and Pat win the big dance contest? Both answers lead to a third question: is this really the project Russell wanted to tackle after resurrecting his career with The Fighter? If so, the choice is perplexing. Silver Linings Playbook is the first film he's directed that's based on preexisting material and that might be the problem. If he felt hamstrung by the things he couldn't change, he should have made another movie. If this is, in all its glory, the movie he wanted to make, then he needs to reevaluate his ability to differentiate between quirk and cliché.