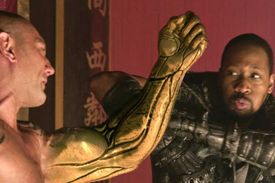 After his interest in filmmaking was sparked by his soundtrack work for directors like Jim Jarmusch and Quentin Tarantino in Ghost Dog and Kill Bill, The RZA—one of the architects of the Staten Island hip-hop force called The Wu-Tang Clan—wanted to make a movie. But The Man with the Iron Fists—even with its combo-platter approach mixing classic martial-arts cinema in all of its glorious excess with the beats and breaks and attitude of hip-hop—isn't the work of a slumming dilettante. It's a real film, and a fun one, made with gonzo good humor and plenty of action from the opening brutal battle over which the sound of The Wu-Tang Clan's 1993 single "Shame on a N***a" roars. The RZA's love for king-fu is evident in every frame here, and while the film's attitude, violence and throw-it-in-a-blender approach will appeal to young and aging hipsters both, it's also hard to imagine the film becoming a crossover success on the level of Kill Bill.

Set in a multi-racial once-upon-a-time China that owes little to history and everything to martial arts filmmaking, the action starts as the Emperor sends a trove of gold bullion to support his armies in the North through the distant, dangerous Jungle Village, a town already ravaged by inter-clan violence; the closest things Jungle Village has to institutions are the brothel run by Madame Blossom (Lucy Liu) and the services of the Blacksmith (RZA). And when the bullion is hijacked—with every clan, drifter and dangerous person of interest chasing after it—the Blacksmith will soon no longer be a neutral party.

The cast is as colorful as it is color blind. Russell Crowe shows up, rampant with violence and depravity, as Jack Knife, a name that gives you an idea of his weapon of choice. Jamie Chung is Lady Silk, one of Blossom's employees the Blacksmith loves and works to free. Ex-wrestler Dave Bautista shows up, glowering and massive, as the supernaturally strong and tough Brass Body. Rick Yune is a blade-wearing do-gooder on the trail of the gold. And Byron Mann and Cung lee are treasonous members of the Lion clan, aided by the campy-but-dangerous Poison Dagger, played by Daniel Yu with the right mix of mirth and menace.

The fight direction is by the legendary Corey Yuen, whose work in the field goes as far back as 1971's The Man with the Broken Fingers—the exact era of martial arts cinema the RZA and the Wu-Tang Clan grew up with—and up to The Transporter (which he directed) and continues. But there is a movie outside the fights here, and that movie looks sumptuous and amazing thanks to production designer Drew Bouhgton (The Expendables, Domino) and costume designer Thomas Chong. The cinematography is by Chi Ying Chan (Detective Dee and the Mystery of the Phantom Flame and the speedy-but-never-too-swift editing by Joe D'Augustine (Kill Bill, Inglourious Basterds) is also superb. It's said that 90% of making your first film is hiring the right people; in this regard, the RZA has not only achieved but excelled.

It's telling that unlike other rappers and hip-hop stars turned actors and directors, The RZA isn't working in comedy or urban crime drama; this is clearly a labor of love, and it shows. The script by Eli Roth and The RZA keeps moving, partially propelled by jets of blood and violent blows, but more importantly never outstays its welcome. It's epic in ambition but brisk in its running time. Martial Arts purists—who insist on petty things like historical accuracy and adherence to the laws of physics—may not appreciate The Man with the Iron Fists. But anyone who gets the kicky, campy pleasures of martial arts movies, especially a weird-as-it-is-ambitious hybrid like this, will find this flick as strong, swift and gloriously goofy as the metal appendages of the title when the Blacksmith take up arms (literally) to save the day.