close
Shocker: This 4th—or really, 6th—installment of ultra violence is bold and fresh 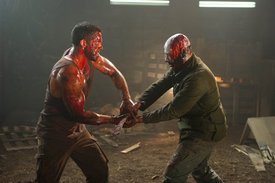 Universal Soldier: Day of Reckoning isn't just one of the most remarkable action films of the 21st century, it also feels like one of the first. Which is especially surprising as this cut-rate slice of ultra-violence is the fourth (or sixth, depending on what you consider to be canon) installment of a franchise that epitomizes the pyrotechnic banality of '90s action movies. Initially, this saga of re-animated rival soldiers Luc Deveraux and Andrew Scott (Jean-Claude Van Damme and Dolph Lundgren) was conceived to exploit the explosively meat-brained vogue of a bygone era, but the series—much like the two dueling beefcakes at its core—refuses to die. While The Expendables and its sequel have made half-hearted sport of their wrinkling action stars, the immortality angle of the Universal Soldier films means they refuse to acknowledge that Van Damme and Lundgren are now a combined 107 years old. Current franchise shepherd John Hyams clearly understands that his latest has to be clever and coy in order to subsist on its fading star power, and so he's reincarnated the Universal Soldier brand as an ultra-violent existential crisis. Playing like a mash-up between Enter the Void and The Raid, Day of Reckoning is an uncommonly assured slice of bargain bin cinema, as arresting to watch as it is impossible to comprehend. Immaculately directed and nearly impossible to dismiss despite its zombified pace, Day of Reckoning could prove to be a mild niche success, though VOD will be where it recoups the brunt of its $11.5-million budget.

The film's first trick is that its legendary lead actors are barely in the thing—despite headlining status, both deliver glorified cameos with Van Damme effectively getting his chance to play Colonel Kurtz. Day of Reckoning wastes little time introducing us to its proper protagonist, opening with (or, more accurately, inside) a stocky family man named John (Scott Adkins) on the worst night of his life. John's young daughter enters his bedroom in the middle of the night complaining that there are monsters in the house, and we're immediately locked into his P.O.V. as he pokes around for intruders. He looks kinda like Matthew Fox in Lost and he acts kinda like Matthew Fox in Alex Cross, and for the next 113 minutes he will serve as our avatar. We watch from behind his eyes (blinks included) as Deveraux murders his family in cold blood, and we're with him when he awakes from a coma nine months later, suffering from memory loss and hell-bent on revenge.

From there, the plot becomes willfully baffling. No attempt is made to catch us up to speed on who these jacked lunatics are or why they're prone to epileptic episodes in which they hallucinate about the bump on Jean-Claude Van Damm's forehead. It's never especially clear why Dolph Lundgren is running the world's most steroidal underground fight club, or why a vaguely Eastern European stripper decides that tagging along with these guys is a good way to spend her day off, but Hyams compensates for clarity with gravitas. Every moment of activity is muted by several of airless disquiet, the film's meticulously arch compositions and hyper-glossy sheen revitalizing and reflecting upon the testosterone cinema of yesteryear through the same warmly subversive lens that Todd Haynes' Far From Heaven looked back at the florid suburbia of Douglas Sirk. Day of Reckoning sincerely loves this stuff too much to satirize it, and the film's three major action sequences are as brutal and elegantly epic as anything the major studios have offered this year—a fight scene in a sports apparel store ends with the most vicious deathblow in recent memory.

But Day of Reckoning seems less interested in functioning as an action movie than it does as a blood-soaked simulation of pre-coded living. Many ultra-violent films present life like it's a videogame, but Day of Reckoning begins with the assumption that we're all being played. That protracted first-person opening sequence transparently deprives us of our own control, underlining the notion that free agency is a deceit. The movie is sustained by the tension that exists between John feeling like he's in control, and the fundamental knowledge that he isn't. We're repeatedly reminded that John's mind is not his own, but that information has no bearing on the choices that he makes. He understands that violence won't solve anything—just like we understand that impaling Dolph Lundgren's head with a machete won't prevent him from appearing in the next installment—but it's the only means of expression he's got. Imagine Memento's Leonard Shelby with an itchy trigger-finger, and you're halfway there. A mirror-image of Paul W.S. Anderson's similarly fascinating Resident Evil: Retribution, Day of Reckoning expresses how videogame logic reflects—not informs—contemporary culture. This is a movie about people who are created with the purpose of products, and it simulates their experience to an unnerving degree.

Ultimately, Day of Reckoning is an action movie that's stronger and smarter than most of its previous incarnations, yet so committed to its undying sense of self that it doesn't feel like anything else. It's self-serious to the extreme and loaded with laughable dialogue (the speech containing the titular line is an all-timer). Still, it's so well-crafted and loyal to its own inert insanity that you can't look away. Like The Terminator on a morphine drip, it's a rich throwback to a time when gratuitous nudity was the only kind of nudity, when being a man meant dismembering another man, and you didn't need to be able to form intelligible sentences in order qualify as a warrior-poet. The lesson of this unexpectedly potent kick of sci-fi strangeness: at the end of the day, big muscles just need to be flexed.