close
Professionals at work—on both sides of the camera 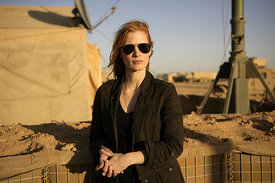 The decade-long manhunt for Osama Bin Laden races by in a 159-minute adrenaline-fueled chase in Kathryn Bigelow's Zero Dark Thirty, which unfolds with certainty and smart decisions on both sides of the camera. It's a rarity, a truly entertaining film that never condescends to its audience or cheapens history and truth. Zero Dark Thirty lacks the existentialist peril and high drama of Bigleow's previous, Oscar-winning The Hurt Locker, but replaces those showy-but-strong elements with both tension and truth in the pursuit of drama, fiction lightly draped over fact. Despite a star-free (and talent-rich) ensemble, its box office can count on curiosity, awards-season buzz and the word-of-mouth in support of its excellent and unsentimental approach.

Zero Dark Thirty opens to the sounds of 9/11, but the script—based on both the research of journalist-turned-screenwriter Mark Boal and other reporting—really begins at a overseas U.S. facility in 2003, where a CIA field man (Jason Clarke) gives newer hire Maya (Jessica Chastain) a quick tutorial in the nature and necessity of waterboarding. It's upsetting for both Maya and us (and Bigelow doesn't cut away to spare us the sight of this torture), but when the man being interrogated asks Maya for understanding and help, she simply says, coldly "You can help yourself ... by being truthful." And then Maya, and us, are plunged into the pursuit of Osama Bin Laden, the leader of Al-Qaeda, with all of the false starts and blind alleys and red herrings you would expect in the hunt for the most wanted man in the world. But Maya stays on target.

The procedural nature of Zero Dark Thirty is fleet and fascinating. Watching the film, you learn everything from how Navy SEALS open a locked door to, ironically, how the high secrecy of Bin Laden's house in Abbotabad, Pakistan is what gave it away. You don't get a lot of explanation—no one ever says any dead exposition or rehashes Wikipedia entries about the film's torrent of names and places, people and organizations—and it's nice to enjoy an American film that assumes you have intelligence and relies on it. Many early critics and Awards-watchers are already bemoaning Bigelow and Boal's just-the-facts approach as a drawback, wondering why the film refuses to incorporate the character's "backstories" or "home lives." For those voices of disapproval, let it be noted that your local cable operator can help you find The Lifetime Channel, whose style of storytelling may be more your taste.

Bigelow's films have always been about people at work: team dynamics driven by dynamic individuals, triumphs achieved through effort, failures brought about by not knowing what you're doing or why. Chastain's Maya never gets to give a big speech about being a woman in intelligence, but she mostly doesn't have to, and the film makes smart points in brief moments. Bigelow is also not afraid of darkness, or silence, or stillness; the assault on the compound, even though we know how it turned out, still plays out with the tension of held breath and pin-drop quiet in the theater.

Boal's work turns reality into fiction, protecting sources while unveiling secrets, and it serves the plot that runs between the scenes and the scenes that make the film, with notes and nuances that feel right. Much like bomb disposal in The Hurt Locker, Zero Dark Thirty is about intelligence as a job—one done by people, and one where people can make mistakes—and that like all jobs, intelligence involves co-workers you don't like, late hours, petty turf grabs and ass-covering lies, just with deadly consequences. The superb camerawork is by Greig Fraser, with Dylan Tichenor and William Goldenberg's editing propelling the story and focusing your attention but never forcing either. Stark and tough and smart, Zero Dark Thirty is a masterwork from a master filmmaker, a truly exceptional work that combines the questions and qualms so often found in the grey areas of the real world with the kind of storytelling and art so rarely found in the shared darkness of the movie theater.