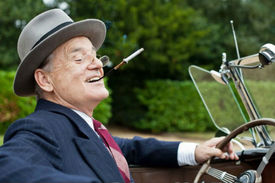 As yet another awards season film featuring King George VI and his wife Queen Elizabeth, Hyde Park on Hudson suffers, perhaps unfairly, by comparison with Best Picture Oscar winner The King's Speech. But this odd tale about the Royals' historic weekend visit to President Franklin Delano Roosevelt (Bill Murray) in June of 1939 really focuses on the personal life of Roosevelt and his numerous indiscretions, particularly with distant cousin Margaret "Daisy" Suckley (Laura Linney). A competent period costume drama, this intimate character study is light as air—and probably more suited to Masterpiece Theatre than as a major theatrical release—yet the worldwide success of King's Speech might indicate a bigger cinema audience than seems likely at first glance. Decent box office returns in arthouse situations are reachable but Hyde Park's real happenings will inevitably take place on the small screen.

The key reason to visit Hyde Park is Bill Murray, who winningly portrays Roosevelt with sly understatement and assured authority. A surprising choice to be sure, Murray proves again, as he has so often in films like his Oscar-nominated turn in Lost In Translation, that he is a first-rate actor capable of much more than he or Hollywood seems willing to admit. If only Richard Nelson's script based on his own radio play or Roger Michell's mostly uninspired direction lived up to the gravitas Murray brings to this table.

Narrated by Linney's Suckley character, the story gets going when this unremarkable woman in her mid-40s is asked to come to the Roosevelt estate in Hyde Park, New York to see the Chief Executive, a surprising move as she's merely a sixth cousin who hasn't been part of his life in years. It quickly becomes clear that her helper role at the house includes "helping" the Polio-stricken President with his sexual needs. Although extremely tastefully handled, these scenes are still awkward, until things liven up when the King and Queen arrive. The royal weekend is the strongest section of the film, particularly Roosevelt's heart-to-heart with the King (nicely played by Samuel West) who of course suffers from his own physical challenge: a stutter. (Maybe you've heard of it?) Olivia Colman's portrait of the Queen is basically played for laughs triggered by her uptightness among these "tacky" surroundings and—God save herself—the American hot dogs that are served at the celebration.

Most of the film consists of different moments for each quirky cast member including Roosevelt's Secretary and "confidante" Marguerite Le Hand (Elizabeth Marvel), Eleanor Bron's very fine turn as Suckley's mother and best of all, a delicious Eleanor Roosevelt played to the hilt by a wonderful Olivia Williams. As this film shows it, Eleanor is a bit more distant, sexually speaking at least, than even Linney's distant cousin...and she may have had her own indiscretions. Linney tries hard to breathe some life into her character, but filmmakers Nelson and Michell miscalculate her worth to the film. But this is Murray's show all the way—and he makes it worth the visit.