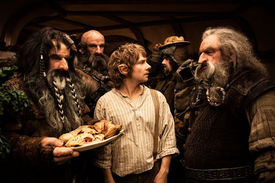 This winter, audiences will not only have the choice to see Peter Jackson's The Hobbit, they'll also have the choice to see it in 2D or 3D, or in 3D at 48 frames-per-second, a speed twice as fast as conventional projection that promises a clearer, more lifelike and sharper image. What the 48 frame-per-second projection actually means is flat lighting, a plastic-y look, and, worst of all, a strange sped-up effect that makes perfectly normal actions—say, Martin Freeman's Bilbo Baggins placing a napkin on his lap—look like meth-head hallucinations. Jackson seems enamored of 48 fps, but I can't imagine why. To me, it turned the film into a 166-minute long projectionist's error. I wanted to ask the projectionist to double-check the equipment, but really, I should just ask Jackson why he wanted his $270 million blockbuster to look like a TV movie.

That's not the only challenge faced by The Hobbit, Jackson's adaptation of J.R.R. Tolkien's 1937 novel of fantasy and adventure. It's the problem of prequels. Like what George Lucas bore when he returned to Star Wars for The Phantom Menace, the audience, the expectations and filmmaking itself have matured but the storytelling is more juvenile. (To be fair, Jackson is working from Tolkien's books, albeit in reverse chronological order—Lucas alone has to shoulder the blame for his prequels.) Lord of the Rings was a saga, three huge books stripped down to fit on the screen. A mix of Wagner, Dungeons and Dragons and Days of Our Lives, it was a huge risk and it worked. The Hobbit is no such thing. It's one short book—the page count alone is shorter than each of the Lord of the Rings paperbacks—pumped up into three films to give Warner Bros a few years of safe profit. And where the Rings trilogy had weight, The Hobbit is all wigs and slapstick and head-lopping violence unsuitable for children—who are the only audience who won't be bored to tears.

But thank Martin Freeman for his work as Bilbo, the ostensible hero of the series, although he does precious little in this first throat-clearing film. His Bilbo is an immensely human, warm and humble everyman hurled into danger and threat by the wizard Gandalf (Ian McKellen) who insists he aid a group of dwarfs determined to regain their ancestral home from a dragon. And even if Jackson's judgment can be questioned both for the 48 fps and for tackling this chore himself instead of sluffing it off to some other director, his skills as a film maker are as well-honed as ever. (Then again, Jackson did try to put Guillermo Del Toro in the director's chair, who wisely pulled out, leaving Jackson to salvage the effort.)

Still, let's be honest: J.R.R. Tolkien and Ayn Rand top the list of writers who penned beloved, but badly written books. Tolkien could invent names and languages, but he couldn't create a plot at gunpoint. Any and all crises in The Hobbit are solved by McKellan's Gandalf casting a spell that he could have cast 10 minutes prior. The utter lack of female characters (save but for a cameo from Cate Blanchett reprising her role as Elf royalty) makes The Avengers look like The Women. And the 12 dwarfs on the trek are a nameless, needless bundle of cutesy bumbling and musical numbers. Warner Bros is hoping The Hobbit will be a smash...and, well, it probably will be, if only because fans, unlike filmgoers, seem to have no rational mechanism that keeps them from paying money for under-made nonsense, even if only to complain about it afterward. And if fans and their lack of judgment have taught Hollywood anything in the past decade—much to our regret—it's that a begrudging dollar is worth just as much as a dollar well-earned.

The Hobbit is just good enough to make you aware of how it could have been much, much better. If you take your kids—while shielding them from various nonhuman bad guys getting decapitated both repeatedly and, worse, bloodlessly—they'll have a good time. Bilbo Baggins' quest for adventure and Warner Bros' quest for cash will take him through three films. But your quest for epic, truly entertaining filmmaking will be more successful if you just stay home.