close
The visuals are harrowing, but is that enough? 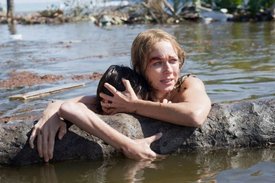 To those who look upon disaster movies as mere escapism, Spanish director Juan Antonio Bayona has something to show you. The Impossible, his follow-up to 2007's The Orphanage, is based on the true story of a vacationing family separated in the 2004 Indian Ocean tsunami that killed over 230,000 people. The key selling point is Bayona's ten-minute reenactment of the tidal wave and its carnage, which is brutal, visceral and without peer. His visual mastery is almost enough to make up for The Impossible's conventional final hour and the empty feeling of trying to find the point of this whole exercise, since there's no greater thematic ambition being pursued, nor are the characters fleshed out to any degree. Still, Summit can turn a nice worldwide profit by emphasizing the tsunami scenes, which represent a pinnacle of physical filmmaking.

It says a lot about movies today that a film about a horrifying true-life catastrophe involving 14 countries can only get made if it stars an Oscar-nominated Australian (Naomi Watts) and a marketable Scot (Ewan McGregor). Geographically appropriate Asian actors, presumably not famous enough, are seen only in aid-giving capacities. Still, Watts and McGregor are both excellent as Maria and Henry Bennett, who've arrived at a Thai beach resort with their sons Lucas (Tom Holland, a real find), Simon (Oaklee Pendergast) and Thomas (Samuel Joslin). Scripter Sergio G. Sanchez deftly and quickly establishes the family's loving, upper middle class dynamic: he's a British businessman and she's a doctor who retired to care for her boys, of which Lucas is the most strong-willed. In paring the story down to the bone, Bayona and Sanchez keep their sights focused exclusively on the Bennetts. There are no TV crews breathlessly reporting from corpse-strewn beaches, no intercutting between other families and no heated conversations between furrow-browed politicians. We experience the tsunami solely through this family's eyes.

With the Bennetts introduced, the first wave hits. But we feel none of the movie-lover's euphoria at scenes of epic destruction. Maria's suffering is depicted with the most detail, as she's buffeted underwater mercilessly, unable to avoid the fast-moving debris. Mere yards away, Lucas tries to grab a tree or a wayward mattress for support. When a second wave approaches, don't be surprised if you gasp (and marvel at the amazing sound design). After the danger has passed, Maria drags herself and her badly injured leg up a nearby tree, before she and Lucas are rescued and transported to a local hospital. It's a gruelling journey to safety that Bayona depicts with such a realist's eye that the distance between the viewer and the characters is effectively removed. You'll feel like you've been through the tsunami yourself. Once at the blood-soaked, casualty-filled hospital, Maria is placed on a cot where she worries that her leg will turn black and require amputation. Maria's bedridden status leaves her with little left to do in this story, so it's up to Lucas to discover the satisfaction of helping others and the willpower needed to stay strong for his mother.

If Watts convinces in yet another role requiring her to convey extreme emotional duress, McGregor, not known for eliciting our sympathies, reveals wonderful new depths to his talent. In one heartbreaking scene, Henry, after reluctantly sending young Simon and Thomas to a shelter by themselves, uses a borrowed cell phone to call his father-in-law. The exhausted, determined family man has suppressed his emotions for so long, that the mere act of verbalizing his experiences causes him to break down. Indeed, some of the best post-tsunami moments in The Impossible involve such expressions of grief and intimate gestures of kindness: the extra few seconds granted Henry on the borrowed cell phone or the words of wisdom from an elderly stranger (Geraldine Chaplin).

Otherwise, the quest to make the Bennett family whole again, while necessary and factual, is where the film gets increasingly less interesting. Bayona, playing to his strengths, has solved the problem of the tsunami. However, he cannot fully solve the problem of its aftermath. The story, based on the real-life ordeal of the Belon family, is just too limiting, no matter how intense the emotions and accomplished the production. After the white knuckle first act, the family's sole remaining task is to reunite, which never seems anything less than inevitable. So the tension, which felt so authentic in the early-goings, now takes on an artificial tinge. Near-miss encounters like Henry exiting a hallway moments before Lucas walks down adjacent stairs feel manipulative -- an emotion that The Impossible had before nimbly and conscientiously avoided. It's a shame because Bayona, as part of the exciting wave of directors that began emerging from Spain and Latin America in the early 2000's, can officially lay claim to the title of master visualist and conveyor of primal, gut-level dread. One can even argue that he saves his most terrifying image for last: a small plane gliding over a limitless ocean. It conveys the ultimate truism about the natural world: it's vast, untameable and indifferent to human suffering.