close
Fans to Judd Apatow: "We want a divorce" 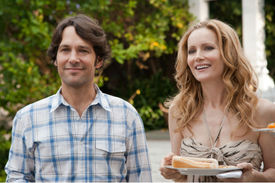 "People think I'm nice, but I'm such a dick," says Paul Rudd in This is 40. Now we believe him. Judd Apatow's latest should have been called This is 40 Going on 14, because married couple Pete (Rudd) and Debbie (Leslie Mann) have aged down since we last met them in Knocked Up: Rudd's reclaimed his '90s haircut, and Mann now speaks in a baby voice and sneaks cigarettes like a high school freshman. Worse, they fight like pouty preteens, which means halfway through this so-called comedy, we're rooting for their divorce, or really, their outright death. (Hey, even Pete wishes Debbie would slip into a coma—women love widowers.) Though the first film is what anointed them as stars, Katherine Heigl and Seth Rogen are smartly absent from this sequel, and audiences will likely follow suit.

This is 40 opens with what looks like a moment of long-married bliss: Pete and Debbie boning in the shower. But like the rest of the flick, here comes the cockblock. Pete cops to being on Viagra, Debbie panics like an insecure schoolgirl, and instead of working it out like grown-up people, they whine and sulk and then head downstairs to their kids (Apatow and Mann's real-life daughters Iris and Maude) where Debbie pretends she's turning a mere 38. At first, this seems to be a somewhat honest look at a long-term couple who no longer get along. But weirdly, as the 134-minute film ticks on, it seems increasingly impossible that they ever made sense, or really, that they've even met. In one scene, Debbie grumbles that Paul, a record label exec, is listening to the Pixies, a band she seems to have never heard of even though they've been married since the '90s. In response, he asks his wife of a decade and a half what music she likes and is aghast when she chirps, "Lady Gaga!" Apatow gives us a couple who know less about each other than I do about my middle school friends on Facebook. Why should we bothering caring about them if they can't even care about each other?

Here are other reasons why they're miserable: Debbie nags, doesn't like going to his concerts, wants to go gluten and sugar-free, and spends like their bank balance is bottomless but hates his spendthrift dad (Albert Brooks). In turn, Pete binge-eats cupcakes, openly admits to looking up the dress of her hot employee (Megan Fox), funnels nearly $80K to his dad while avoiding admitting to Debbie that they're broke, and is generally just checked-out and subtly, destructively dismissive. Fair enough. But the key reason we're miserable around them is because they're not even charmingly awful. Apatow has drifted further and further from comedy with every film, but This is 40 is the first where he hasn't even bothered to write any jokes. Instead of snappy dialogue, we get lazy exchanges like this when Debbie asks Pete if he'd like her dead:

Hepburn and Tracy, they aren't. Hell, they're not even Heigl and Rogen. This real-world, semi-improv comedy with its awkward pauses and unfunny repetition has reigned too long. And Apatow's disregard for character and wit extends to his supporting actors, a cavalcade of comedians shoved in for flashy four-minute bits which do little to advance the plot or each person's career. Melissa McCarthy is an angry schoolmom, Jason Segel is a personal trainer, Charlyne Yi sells clothes, and Chris O'Dowd and Lena Dunham work under Rudd and say things that would get you fired from any other office. Apatow is furiously flinging out things that should be funny, yet for all the sweat, it feels like he's not making an effort. Ironically, who gets the most sincere laughs are non-comedians Megan Fox and John Lithgow in the film's most un-comedic roles. At best, all these shoehorned-in sidekicks are distractions. (Segel as a health nut? Really?) At worst, they tempt us with the half-dozen other movies we'd rather Apatow have made instead: McCarthy as a PTA overlord, Brooks and Lithgow as rival fathers-in-law, O'Dowd and Segel competing for Fox's hand, O'Dowd in, really, anything else.

Still, the agonies underlying This is 40 ring true even if the film about them is phony. Which makes me worry about what's going on in Judd Apatow's house. Not since Miley Cyrus played a normal girl who played a rock star (then became a rock star herself) against her real dad and pretend dad Billy Ray has there been such an onscreen psychoanalytic smash-up of family tensions. What would possess a director to conceive, write, and cast a movie where his wife and kids look like awful people? I pray the maxim "Write what you know" is false, or else I hope there was a good family therapist on hand to untangle the emotions from a father/writer/director telling his 10-year-old to be mean to mommy for the cameras.

Six years ago, the Vince Vaughn/Jennifer Aniston flick The Break-up proved a romantic comedy can end with a split. Apatow doesn't have the heart or the cojones to ditch his studio-friendly happy ending (even if, like Knocked Up, the "happy" ending is Heigl marrying down), and so after hammering home the fact that Pete and Debbie are horrendously mismatched, immature, and uncommunicative, This is 40 has to send us out smiling. And so, they must join forces to triumph over Melissa McCarthy, whose character has to get wholly unhinged to convince us that she's a worse person than they are. "You look like a bulls--t bank commercial couple!" she spits. The manicured Mann and blandly handsome Rudd, Apatow's two golems of misery, rotate their heads to each other and blink in astonishment. But it's the movie's most honest moment—just replace "bank" with "divorce attorney."