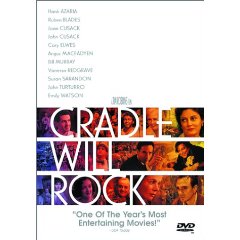 So yesterday morning I was immersed, as is my custom, in the great warm bath that is the New York Times Arts and Leisure section, when I discovered that some dirty hippies had just mounted a chamber revival of Marc Blitzstein's legendary 1937 lefty agit-prop musical The Cradle Will Rock. For those who don't know the show, it's a Depression Era parable about a predatory Capitalist system run amok, and thus obviously relevant to our contemporary circumstances; as the Times reviewer concluded "Leaving the theater I overheard several people muttering variations on 'Nothing changes'."

The show also inspired one of the great, and most inexplicably underrated movies of recent years, writer/director Tim Robbins's Cradle Will Rock, a sort-of backstage recreation of the genesis of the piece which I described at the time as "a look at the collision of the Depression-era art world and politics that may well be a masterpiece."

The government-funded Federal Theater group, home to Orson Welles (Angus McFadyen) and gay composer Marc Blitzstein (Hank Azaria), is staging a pro-labor musical that looks to be shut down on the eve of its opening courtesy of Red-baiting rightwing congressmen. Around that, there's a dizzying succession of subplots involving the stormy relationship between Nelson Rockefeller (John Cusack) and radical artist Diego Rivera (Ruben Blades); a passel of American businessmen funding Mussolini's war machine; and paranoid, right-wing ventriloquist Tommy Crickshaw (Bill Murray, in the role of his life), whose dummy walks out on him. There's a lot more, including stellar turns by Joan Cusack, Susan Sarandon and Emily Watson, and it all finally climaxes in a thrilling taking-it-to-the-streets performance of the titular musical, the overall effect of which is...well, let us not mince words -- downright Welles-ian.

Here's the trailer to give you an idea of just how sensational the whole thing is.

So why did the film get lost? I haven't a clue, except perhaps there was something about the late Clinton era that didn't quite fit with Robbins' passionate lefty vision. In any case, as noted above, the time may well be right for a second look; you can -- and emphatically should -- order the DVD here.