Great Lost Babes of the Sixties (An Occasional Series)

A friend of mine e-mailed me the other day with a question I've heard a lot of late. "Steve," he wrote, "how is it possible that a crime against nature like Get Smart has been the number one movie in America for two weeks running? Please advise, or barring that, forward hemlock."

Okay, I made that last part up, but a number of folks whose opinions I respect have been asking me the same thing, and I've given them all the same answer. In my humble opinion, it's because Anne Hathaway, who plays Agent 99 (and on whom I have a huge and wholly inappropriate crush) is a total doll.

Hey -- it's not rocket science.

Anyway, it got me thinking. Does Hathaway really hold a candle to original TV 99 Barbara Feldon? More to the point, could Hathaway ever have come to prominence, as did Feldon, by lying on a tigerskin rug in a dandruff cream commercial? Much as I yearn for her, I think not. [Interesting trivia note: Feldon is also a MENSA member. Brains and beauty, in other words.] 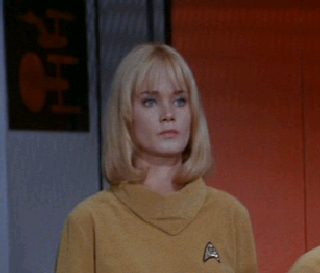 Said musings, in turn, got me thinking of some other fabulous 60s babes who don't get nearly enough credit -- the number one (for me, anyway) being quintessential surfer girl summer blonde Andrea Dromm. Geeks of all ages will of course remember Dromm as the toothsome Yeoman Smith in the second Star Trek pilot, "Where No Man Has Gone Before." People my age (by which I mean as old as my parents) might also recall her from a series of TV ads where she played a stewardess who asked the existential question "Is this any way to run an airline?"

What she really deserves to be remembered for, however, is her radiant turn as Alison Palmer, Carl Reiner's teenage baby sitter in Norman Jewison's classic 1966 Cold War comedy The Russians Are Coming, the Russians are Coming. That's her below, with co-star John Phillip Law. 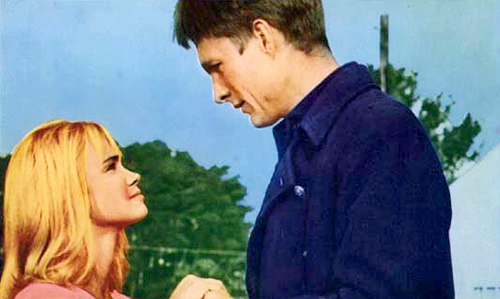 The picture, alas, doesn't remotely do her justice. If you've ever seen the film (and if you haven't, you should order it here immediately, if only to witness Jonathan Winters delivering the immortal line "Oh, blow it out your ass!"), you know that Dromm is simply to die for in it, with an amazingly contemporary style. She's dressed for most of TRAC in just a little denim jacket, a t-shirt, and rolled up jeans; she seems quite genuinely timeless, and frankly, if she walked into the frame of any 2008 movie looking exactly like she did as Allison in 1966, she'd still steal every scene she's in.

Where is she now? Well, according to her IMDB entry, she's retired from show biz and living on Long Island with her mom (apparently, she made some fortuitous real estate investments before the acting dried up). In any case, if it turns out there are any photos of her on a bearskin rug, I'll let you know.