Help Me Find the Keys And We'll Drive Outta Here

Caught the latest trailer for the upcoming Journey to the Center of the Earth -- starring Brendan Fraser and what struck me as fairly unconvincing giant CGI reptiles -- in a theater over the weekend. Being a sucker for all things 3D (although I must admit the Imax version of Superman Returns made me literally nauseous) -- I'll probably go see it when it opens on July 11th anyway. But then again, as Gong Show auteur Chuck Barris used to say -- what do I know? I like cold toilet seats.

Journey is, of course, a remake of the oft-filmed Jules Verne story, best known from the 1959 Henry Levin version, which is generally considered definitive despite a certain good new/bad news quality. On the one hand you have James Mason as the hero, great wide-screen photography and sets, and a fantastically eerie score by genius composer Bernard Herrmann. On the other, you have Pat Boone as the male ingenue, a duck as comic relief, and dinosaurs that are actually gila monsters with rubber appendages glued to their backs, a cheeseball device that has pissed off F/X crazed kids at least since One Million B.C. in 1940. Incidentally, you can see said gila monsters in the trailer below, starting at approximately 2 minutes 46 (Gertrude the Duck shows up earlier, at about 58 seconds). 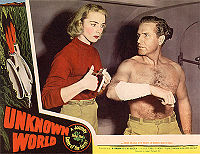 Actually, the version of the story I prefer (and don't even get me started on the 1999 TV mini-series with Treat Williams) is Unknown World (1951), which recasts the classic tale in a Cold War context. The plot, via Wikipedia:

Dr. Jeremiah Morley (Victor Kilian), concerned about an imminent nuclear war, builds an atomic-powered drilling machine known as the Cyclotram and organizes a scientific expedition to find an underground environment where people could escape from obliteration. Government funding falls through, and at the last minute the expedition is bailed out with private financing from a newspaper heir who insists on going with them as a lark. Romantic rivalries develop, but in the end the scientists find an enormous subterranean expanse with plentiful air, its own ocean and phosphorous light. However, the lab rabbits they have brought with them give birth to dead bunnies; the underground world has rendered all sentient life forms sterile. Dr Morley is depressed by the news and when an underground volcano erupts he refuses to re-enter the Cyclotram and perishes. The survivors enter the underground sea and find themselves rising up to the surface of the upper world in the ocean, fortunately near a tropical island.

All of this is surprisingly diverting, thanks to better than you'd expect F/X (the Cyclotram is actually pretty cool, some of the cave footage was shot in Carlsbad Caverns) and nice work from Killian, a veteran character actor best known for his work on TV's Mary Hartman, Mary Hartman in the 70s, who stars unbilled because of the McCarthy-era blacklist. There's also a nice score by composer Ernest Gold, a talented guy who went on to much bigger things including winning an Oscar for the music for Exodus in 1960, marrying soprano Marni Nixon (who dubbed Audrey Hepburn 's singing in My Fair Lady) and fathering Linda Ronstadt's guitarist Andrew Gold, of Lonely Boy 70s shlock hit fame.

Anyway, thanks to the miracle of Google Video, you can actually watch the entire movie here (a better looking DVD version is available over at Amazon.) As for the Brendan Fraser flick, we live in hope that, at the very least, a pet duck won't get the biggest laughs.