Everything Old is Schlock Again 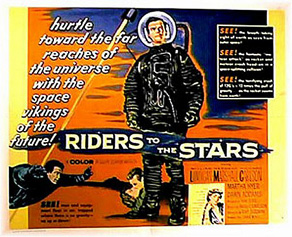 Got up early this morning (no TiVo, alas) to watch a 50s indie sci-fi film I'd never seen before -- Riders to the Stars -- on Turner Classic Movies. Turned out to be a pretty good flick -- directed by and starring hero of my youth Richard Carlson (the "I" of the great deliriously paranoid anti-Commie TV series I Led Three Lives) -- with surprisingly good special effects in astoundingly unreal Cinecolor. But about half way through it something started to nag at me about the plot, which seemed eerily familiar.

A secret government agency tries to find a way to capture meteors before they enter the atmosphere. They decide to send astronauts into deep space—something that has never been done before—and begin secretly recruiting and testing volunteers. Ultimately, three rockets are launched. The first attempts to capture a meteor that is too large and is destroyed as a result. The pilot of the second rocket has a psychological breakdown. And the third and final astronaut ends up burning excessive fuel and risks burning up upon re-entry.

And then, of course, it hit me. RTTS was, in fact, recycled in 1998 by arch-demons Jerry Bruckheimer and Michael Bay into the astoundingly stupid Bruce Willis vehicle Armageddon. 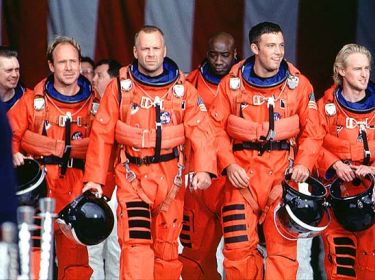 Okay, as you can see there are five or six astronauts in Armageddon as opposed to only three in RTTS, but Bruckheimer obviously had more money to waste on Ben Affleck's salary than pioneering sci-fi producer Ivan Tors.

Oh well. There doesn't seem to be any currently available DVD version of RTTS, so if you'd like to check out the original watch the TCM schedule; they'll probably rerun it sooner rather than later. A perhaps interesting trivia note: RTTS co-star William Lundigan went on to play the lead in the pioneering sci-fi TV series Men Into Space, a show about the colonization of the moon that featured special effects that were years ahead of their time, but nonetheless bored pubescent thrill-seekers of 1959-60 (like me) to death due to its total and inexplicable dearth of monsters, ray guns and other cool outer space stuff. Come to think of it, this may explain the later career of Jerry Bruckheimer.