...has not yet heard the dreadful news, as Bertolt Brecht famously said, but we can be sure he wasn't talking about the suits at Warner Brothers. The news, as of this morning, is that The Dark Knight has become the proverbial excuse to print money; in fact, the betting is that it will overtake Titanic, heretofore the all-time top grossing film ever, in another couple of weeks.

Okay, to get serious for a minute, my take on TDK is that it's pretty much as great as you've heard -- Heath Ledger's ultra-scary Joker being only the icing on the cake -- with the exception of a bloated and dramatically unsatisfying third act. I actively detested Batman Begins -- short version: Too much Frank Miller influence, not enough Marshall Rogers -- but with this one writer/director Christopher Nolan pretty much got everything right, or at least until he felt compelled to spell out in tedious detail what the audience had figured out in the first ten minutes, i.e. the Batman and the Joker are two sides of a coin (a point made even more annoyingly obvious with the the drawn out coda involving (duh) Two-Face). In any case, it's mostly a very impressive piece of work, and probably as close to the Batman of our dreams as anyone's ever going to get to in a live action film. 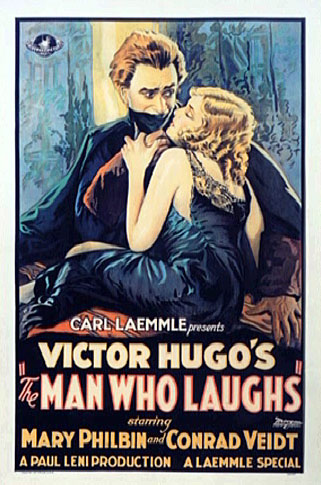 That said, however, there is some bad news, i.e. there probably won't be a DVD version of the thing (or at least one that wasn't shot with a camcorder from a seat at your local Hell Octaplex) for at least a couple of months. So for those of you suffering from Joker withdrawal, may we suggest you check out Kino Video's absolutely gorgeous version of Paul Leni's 1928 silent masterpiece The Man Who Laughs, starring the great Conrad Veidt?

Why, you ask? Well, apart from the fact that Leni's film is a stylish, spooky piece of grand guignol melodramatic horror, because Veidt's hideously disfigured titutlar character... 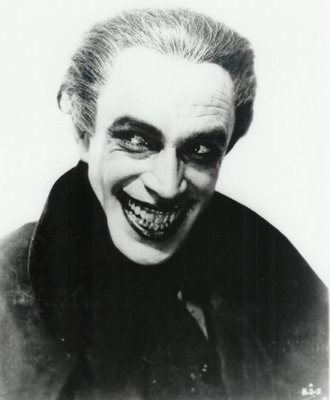 is the acknowledged influence on a certain grinning gargoyle... 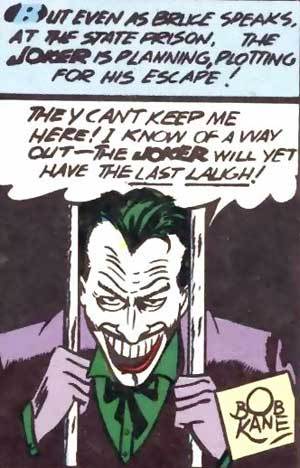 created by artist Bob Kane and writer Bill Finger , as seen in the very first issue of the Batman comic book, that's why.

Here's a clip to give you a little idea what the film is like; the damsel in distress, incidentally, is Mary Philbin, who did similar duty opposite Lon Chaney in the original Phantom of the Opera.

Sound intriguing? Well, it should; get thee over here and order it now.

Coming tomorrow: Conclusive proof that the Fantastic Four's Dr. Doom was completely ripped off from the Tin Man in The Wizard of Oz! Okay, just kidding on that one....