Hour of the Woof 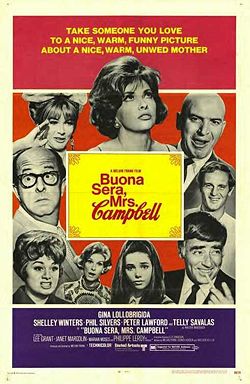 Tomorrow's head to head release of dueling summer blockbusters is shaping up to be a truly Manichean choice for audiences, a titanic battle between the forces of darkness and light as represented by the despairing fatalism of the new Heath Ledger flick and the sunny hedonism of Mamma Mia! (or as we've taken to calling it around Casa Simels, Buona Sera Mrs. Campbell: The Musical.)

Not yet having seen either film, of course, I have no idea how this stark duality will ultimately play out, and perhaps I'm over-dramatizing; I mean we're really talking about just another superhero epic and a chick flick. Still, there's a certain irony in the idea of a musical based on ABBA songs as the antithesis of the doomy noir universe of The Dark Knight. Which is to say that ABBA are Swedish, with all the dour gloom that entails.

Exhibit A in that regard: The video for their 1976 smash hit "Knowing Me, Knowing You," directed by no less a cinema luminary than Lasse Hallström (auteur of such laugh riots as The Cider House Rules).

Seriously -- it's like a damn Ingmar Bergman flick with a soundtrack by Leonard Cohen. 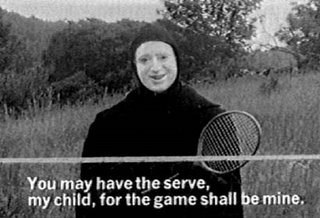 Wait a minute -- did I say "seriously"? Actually, what it really reminds me of is the hilarious 1968 parody Bergman short De Düva (The Dove), an Academy Award nominee (starring the late great Madeleine Kahn in her first film appearance) in which the terminally world weary protagonist (versatile character actor/director George Coe) plays badminton with Death. I was nonplussed to discover that it's no longer available on tape or DVD, but if you click here and scroll down, you'll find a link where you can download it; trust me, it's more than worth the effort.

Still, my favorite Bergman skewering (and if ever a director deserved it, it's the man responsible for the stationery camera/no cutting/six-minute-long Heartbreak of Psoriasis scene in Winter Light) is a little more recent. Ladies and gentlemen, I give you the MST3K Players and A Man and Two Robots.

Okay, has all of this been quite pretentious enough? If not -- Coming tomorrow: My as yet unpublished doctoral thesis "Let It Rain: Intimations of Heat Lightning and Mortality in the Mise-en-Scene of Tropic Thunder!"