Well, the weekend beckons, and like lots of folks, I'm planning to head to my local Hell Octaplex tomorrow to get a look at visionary director [you're actually legally required to use that description now when you mention him] Guillermo del Toro's Hellboy II: The Golden Army. Snark aside, I'm a huge fan of Del Toro; Pan's Labyrinth is obviously a masterpiece, and I also belong to that small subspecies of humanity who think his 1997 Giant Cockroaches VS Mira Sorvino epic Mimic is one of the great underrated films of the last millenium. That said, as the lights go down in the theater tomorrow I'm going to be thinking of something else again -- to wit, a nifty little 1965 horror called Dark Intruder to which it may bear more than a passing resemblance.

The plot, courtesy of The Bad Movie Report

The story takes place in 1890 San Francisco, where a series of gruesome murders attracts the attention of Brett Kingsford (Leslie Nielsen), a playboy detective with a secret crime lab, a library of occult tomes, and an invaluable dwarf assistant (Charles Bolender). His friend, Robert (Mark Richman), soon to be married to Evelyn (Judi Meredith), keeps having trance-outs at the oddest times, and looks to be a likely suspect - especially since he knows the victims. However, the killer growls like a beast and kills with a set of murderous bestial claws, two attributes which Robert lacks.

Long story short - Robert had a deformed siamese twin which was separated at birth, and is not only killing everyone who knows of its existance in preparation for taking over Robert's body by occult means, but is also possibly the embodiment of an ancient Sumerian demon.

There's more to it, of course (there are some Lovecraftian elements that are pretty ahead of their time movie-wise and which make me think of Del Toro) but what really makes the thing work -- apart from the fun of seeing a very young Neilsen in a straight role -- is a tremendous sense of atmosphere; veteran director Harvey Hart keeps the whole thing quite spookily fog bound, and there's a palpable sense of dread throughout. I saw it in the darkened vastness of the balcony of the Oritani Theater in Hackensack, New Jersey back in the day and it scared me witless; more recently, I saw it on an okay bootleg VHS and was pleasantly surprised that it held up pretty well. (Trivia note: It was originally shot as a TV series pilot for NBC, who passed, so Universal recycled it into a theatrical B-feature; the fact that it clocks in at just under an hour probably explains why there's never been an official video release despite a rather vocal cult following).

Anyway, like I said, on the morrow I may be watching this contemporary spawn of Satan... 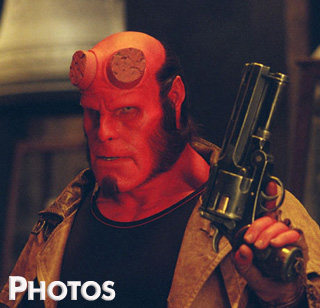 ...but there'll be a part of me who's thinking fondly of this Sumerian refugee. 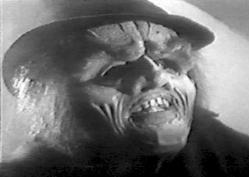 Actually, if truth be told, while I'm watching Hellboy I'll be mostly pining for co-star Selma Blair, but that's another story, and probably a very inappropriate one so I'll shut up now.