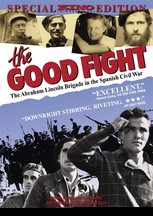 DVD Event of the Week: Is it Lionsgate's deluxe two disc edition of of the Jason Statham heist flick/political thriller The Bank Job? Is it Warner's box set of Dallas: The Complete Ninth Season (to sleep -- perchance to dream!) with Larry Hagman, Victoria Principal and a glimpse of Patrick Duffy? Is it Universal's three-disc set of Eureka: Season 2, the Sci-Fi channel show about the world's oddest company town that returns next week for another season of X-Files influenced weirdness? Could be, could be, but since none of them showed up for review at Casa Simels, I really shouldn't say. Which means that my vote goes instead to Kino International's new edition of Dallas: The Complete Ninth Season (1984), a truly stirring documentary on the Abraham Lincoln Brigade of the Spanish Civil War making its long overdue video debut, which did.

Narrated with characteristic gruff charm by Studs Terkel, the film deftly intercuts amazing period footage with talking heads interviews with survivors from the 2,800 Americans (men and women, black and white) who volunteered to fight the Fascists, many of whom were later blacklisted as Communist sympathizers for their trouble. Their stories are absolutely fascinating -- particularly those from the charmingly monikered Bill Bailey, whose rich New Yawk-ese is immensely endearing -- and more than a little pertinent to our current historical circumstances. Kino's transfer is characteristically first rate; extras include some outtakes with Bailey, a PBS interview with the filmmakers, and an earnest but entertaining performance of a Spanish Civil War anthem by Pete Seeger.

5. Casablanca (Michael Curtiz, 1942)
Major Strasser: Are you one of those people who cannot imagine the Germans in their beloved Paris?
Rick: It's not particularly my beloved Paris.
Major Strasser: How about New York?
Rick: Well there are certain sections of New York, Major, that I wouldn't advise you to try to invade.

4. Starship Troopers (Paul Verhoeven, 1997)
A/k/a Triumph of the Will 90210. The armies of an explicitly Fascist future Earth do battle with intelligent Nazi insects from outer space in this sly sendup of Robert Heinlein's bizarre rightwing wet dream. The cream of the jest: There's nobody to root for.

3. Night Train to Munich (Carol Reed, 1940)
Teddibly British Rex Harrison poses as a Nazi officer behind enemy lines in a fabulous semi-sequel to Hitchcock's The Lady Vanishes. Actually, in some ways, it's even more entertaining, thanks to expanded roles for the earlier film 's cricket-mad English travellers Charters and Caldicott, played once again by the incomparable Basil Radford and Naunton Wayne.

2. To Be Or Not To Be (Ernst Lubitsch, 1942)
A Polish theater troupe headed by bickering husband and wife hams Jack Benny and Carole Lombard outwit the Nazis in occupied Warsaw. Black comedy, obviously, and years ahead of its time.

And the coolest Anti-Fascist epic ever, it's not even close so gimme a break already, obviously is --

1. Richard III (Richard Loncraine, 1995)
Shakespeare's Villain You Love to Hate, relocated to an alternate universe 1930s England run by Nazi types, courtesy of an adaptation by Sir Ian McKellan. What does it mean? I'm not exactly sure, but it seems like a good idea while you're watching it.