Over breakfast this morning I was once again (in Tom Wolfe's wonderful phrase) immersed in the great soothing warm bath that is the New York Times Arts and Leisure section when the following item caught my eye:

More than 40 years after the Beatles first proposed a concert in Israel, a date has been set for Paul McCartney to play there, The Times of London reported. Mr. McCartney’s show in Tel Aviv, which had previously been announced with a date to be set, is now scheduled for Sept. 25. Earlier this year Israel officially apologized to the remaining members of the Beatles for canceling a concert tour in 1965. At the time Israeli officials cited financial problems, and some there had argued against the concert, suggesting that the band’s performance would corrupt Israeli youth. Ron Prosor, Israel’s ambassador to Britain, said the country wanted to “rectify a historic missed opportunity.”

Well, obviously, this is great news for Israeli Beatlemaniacs, but we can only hope it's also a chance to rectify another even greater historic missed opportunity. We refer, of course, to the possible release, at long last, of the Great Lost Beatles album, Rabbi Saul. Originally scheduled for release in 1967, RS was a result of the Fab Four's brief (hidden from the public) flirtation with Orthodox Judaism after their "divorce" (John Lennon's phrase) from The Maharishi; songs -- some of which have been bootlegged over the years -- included "The Shul on the Hill," "Mocky Raccoon," "P.S. I Owe You," and (my personal favorite) "Your Mother Should Only Know."

Okay, that stuff about the album is all made up (in fact, I stole it from an old National Lampoon -- October, 1977 to be exact) but it gives me an excuse to alert you to a really interesting DVD release I didn't have a chance to write about when it was released back in July -- the gritty but until recently overlooked 1955 war film Hill 24 Doesn't Answer (Ergo Media). 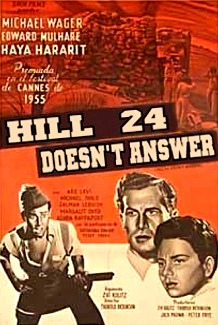 Hill 24 is historically important for being the first international hit feature produced in Israel, but it's also noteworthy as the last film directed by interesting British vet Thorold Dickinson, perhaps best known today for the orginal (1940) UK version of Gaslight. The story, which is surprisingly downbeat and morally ambiguous, centers on three members of a small Israeli unit trying to take a hill overlooking Jerusalem in the last days of the 1947 war; the cast includes Edward Mulhare (familiar from TV's The Ghost and Mrs. Muir and Knightrider) as a former British officer drawn to the Israeli cause when he falls for a beautiful student (Haya Harareet, the Israeli actress who went on to star opposite Charlton Heston in Ben-Hur.) It's all very moody and surprisingly interesting on a visual level; a lot of the black-and-white action takes place at night, and there's a raid on the Old City which uses the claustrophobic twisty streets of Jerusalem in an almost Expressionist way; not for nothing did one critic refer to H24 as "combat noir."

Bottom line: A terrific film, and to paraphrase the old Levy's Rye Bread ad, you don't need to be Jewish; you can (and should) order it from Ergo here. In the interest of full disclosure, however, I should add that the company is based in my home town; next time you're in the Tri-State Metropolitan area, make sure to visit beautiful Teaneck, New Jersey, on the banks of the majestic Hackensack River!