Deja Vu All Over Again

If you were here yesterday, you may recall that I took note of the eerie resembance of the plot of Tropic Thunder , the Ben Stiller/Robert Downey Jr./Jack Black make-fun-of-the-developmentally-challenged epic Hollywood satire currently in theaters -- 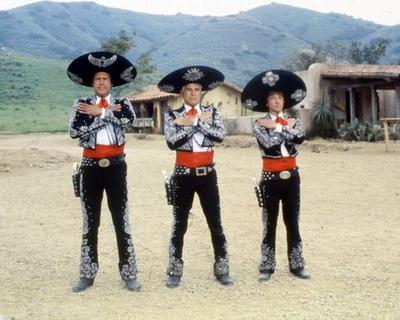 In both films, of course, a bunch of clueless Hollywood actors find themselves in an exotic locale and -- thinking they're filming a movie -- get involved instead in a genuine shooting war with heavily armed bad guys. A nifty premise, certainly, and I must admit that I was rather pleased with myself for catching the resemblance. Reader Zounds What Sounds!, however, notes that I missed another -- far funnier, actually -- recent film with more or less the same plot.

I refer, of course, to the hilarious 1999 sci-fi spoof Three Amigos. 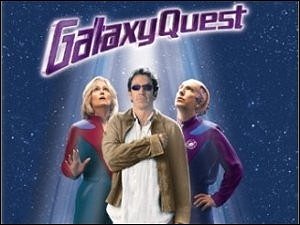 In that one, of course, Tim Allen, Sigourney Weaver, and Alan Rickman play clueless actors from a cancelled TV series -- patterned after (duh) Star Trek -- who eventually find themselves in the middle of an intergalactic war featuring really creepy insectoid villains . That last, it occurs to me, may or may not be a rather pointed satire of certain Hollywood studio heads, and if so perhaps the ultimate inspiration for Tom Cruise's hideous mogul character in Tropic Thunder. 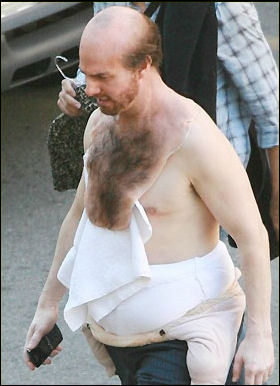 In any case, if you haven't seen Galaxy Quest, it's one of the funniest films of recent years (despite the fact that it never makes possibly hurtful fun of the intellectually challenged) and, best of all, it's a real insiders parody; the people that made it have an obviously genuine affection for the charming fatuousness of the original Trek. Here's the trailer, which gives you a pretty good idea of the thoroughly droll tone of the thing.

Needless to say you can, and should, order it here. In the meantime, rest assured that if I can think of another film with the same story line I will post about it ASAP, even if it's totally devoid of tasteless japes at the expense of the learning disabled.

Coming tomorrow: Why Silence of the Lambs and Kit Kittredge: An American Girl are actually the same film!!!