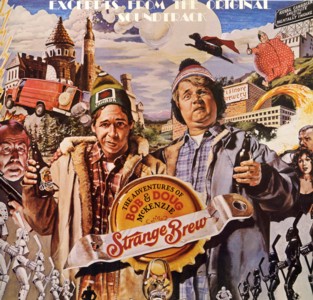 If you were here yesterday, you might recall that -- stunned by at least 4000 exposures to the intermittently amusing trailer for the forthcoming (Aug.22) Steve Coogan comedy Hamlet 2 -- I was moved to ponder some of the most interesting screen versions of Shakespeare's original (or, as those of us in the films and flicks business refer to it, Hamlet 1).

Upon reflection, however, I realized I'd inexplicably omitted two of my favorites, including perhaps the best one ever.

I'm referring, of course, to Strange Brew, the 1983 feature version of the old SCTV routines about dim-bulb Canadian brothers Bob and Doug McKenzie (a/k/a Dave Thomas and Rick Moranis.) Set at the castle/brewery of Elsinore Beer (Elsinore -- get it?), the film features Max Von Sydow as an evil brewmaster (read: King of Denmark), Paul Dooley as a flunky who marries into the the family under mysterious circumstances, and a lot of beer drinking. And Canadian jokes. And beer drinking.

Trust me -- it's actually a loose adaptation of Hamlet. Only with much more beer drinking. (For more on the similarities, waste a few moments here). 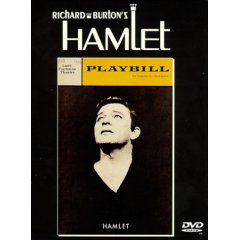 On a slightly lower(?) esthetic level, I'd also be remiss if I didn't mention a curio starring Richard Burton. The stage version of Burton's Hamlet, which was the toast of the Broadway season of 1964, was directed by John Gielgud and had an interesting supporting cast including Hume Cronyn; for the film, three live performances -- in front of paying audiences -- were shot (apparently on video, although this is unclear) and then edited together. The resulting mishmash was then released -- either for two days or a week (again, unclear) -- into movie houses nation-wide; the story was that all the prints were supposed to be destroyed immediately thereafter. Fortunately for fans of Shakespeare in modern dress (and the Liz and Dick soap opera in general), a single print was eventually recovered from Burton's garage, and a home video version released in 1999.

Here's the great man himself discussing the project back in the day. (The interlocutor is future right-wing talk radio crank Barry Farber).

Snark aside, Burton's Hamlet, staged on a bare bones set with the actors in their street clothes, is actually pretty riveting stuff, and, of course, it features very little beer drinking. You can order it here unless you're some kind of weird Canadian partisan.