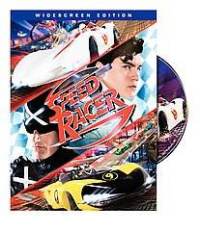 DVD Event of the Week: Is it Errol Flynn: The Warner Brothers Western Collection, a four disc set featuring the unjustly obscure noirish oater Rocky Mountain (with Slim Pickens in his first film role)? Is it Sony's new box set The Three Stooges Collection: Volume 3, collecting all the trio's short films from 1940-42? Or is it Restored Serials new version of the 1922 Harry Houdini silent The Man From Beyond, with the great illusionist as a man awakened after a century long frozen sleep?

All worthy, to be sure, especially the Houdini disc, which is the most complete version of the film currently available (and you can and should order it here). But for my money it's Warner Bros. widescreen version of the Wachowski Brothers ' thoroughly bonkers sort-of live action version of the 60s anime fave Speed Racer.

Don't get me wrong -- by any objective standard, this is a terrible, terrible film. Obviously, the basic idea of taking a really crappy kids cartoon show and blowing it up to the dimensions of a mega-budget Hollywood blockbuster is kind of lunatic to begin with, but the Wachowskis -- whose troweled-on adolescent mysticism and narrative incoherence in the second and third Matrix movies was beyond embarassing -- seem to think what they're doing is absolutely brilliant, despite the absence of remotely plausible characters or even recognizable human beings (it's probably no accident that the most interesting on-screen presence is the damn monkee).

And yet, and yet...the (apparently) almost all-digital design scheme, the garishly vivid psychedelic colors and obviously computer generated action scenes (do any of the cars in the film actually exist in the physical world? I have no idea) all cohere into what for better or worse is a consistently worked out alternative universe; the authors' vision may be dumb as a sack of hammers, but you have to respect the sheer boneheaded obsessiveness and skill with which it's realized. Basically, what you get here is Blade Runner for morons, but it's no less amazing for its idiocy. Warner's disc transfer is pretty much demo quality; extras include a tour of the movie sets with co-star Paulie Litt, which is informative enough as these things go but has a certain annoying (shall we say) self-congratulatory air.

Okay, that said, and because things will be relatively quiet around here till Tuesday, here's an obviously relevant little project for us all:

5. Noah's Ark (Michael Curtiz, 1928)
No digital water was used in the creation of this flood -- it was all absolutely, terrifyingly real, albeit done in a tank on a sound stage. (How real? So much so that three of the extras drowned in the filming). Audiences had never seen anything like this at the time, and it still looks impressive today.

4. First Men in the Moon (Nathan Juran, 1964)
I'm in a small minority that thinks this is stop-motion animation genius Ray Harryhausen's masterpiece. The giant lunar caterpillar was far and away the most realistic monster in screen history at the time, and the opening moon landing footage gets everything that actually happened five years later absolutely right. 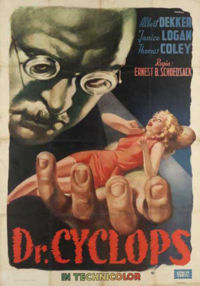 And the all-time coolest mind-expanding FX flick, it's not even close so don't give me a hard time or swear to god I'll smack you, is obviously --

1. The Mask (Julian Roffman, 1961)
Fabulous low budget horror (with an LSD subtext some years ahead of its time) made even more fabulous by astoundingly surreal 3D dream sequences designed by the great montage artist Slavko Vorkapich.