Spent a good part of last weekend at my local Hell Octaplex, mostly to check out The Dark Knight again, and in particular the cameo by Sen. Patrick Leahy, for reasons I will make clear in a moment.

Hamlet 2 -- Funnier than Henry V. Wait a minute...was that the one where he fought the Russian?

Star Wars: The Clone Wars -- Not as funny as Henry V, and somebody really needs to tell the guy voicing Obi-Wan that his impression of Ewan McGregor doing Alec Guinness (or whatever the hell it's supposed to be) is incredibly gay. (Not that there's anything wrong with that).

Anyway, apparently, some people found the brief DK cameo by Leahy a little jarring, in the sense of real life intruding on a fantasy. I didn't really mind, myself, but that's probably because I'm still smarting from the far more egregious appearance of Rudolph Guiliani in the 2003 Adam Sandler/Jack Nicholson vehicle Anger Management. If you haven't seen it, that's the one where the (then) undivorced from Donna Hanover Guiliani shows up as himself (along with his harlot un-married mistress Judy Nathanson) in a scene in front of 50,000 fans at Yankee Stadium, urging the Sandler character to propose marriage to Marisa Tomei no less. I don't know -- somehow that struck me as being in kind of bad taste.

Anyway, for some reason that reminded me of what is probably the single most egregious example of Bizarro World celebrity casting in the history of cinema. I refer, of course, to the 1963 version of Mickey Spillane's hardboiled/sadistic Mike Hammer thriller The Girl Hunters starring, uh, Mickey Spillane(!) as Mike Hammer.

Now, I'll grant you, Spillane wrote the book, and if he saw himself as the protagonist, well that's his prerogative. Sure, Mick -- go ahead. Cast yourself as Hammer. No problemo. Of course, the fact that Spillane actually looked like this -- 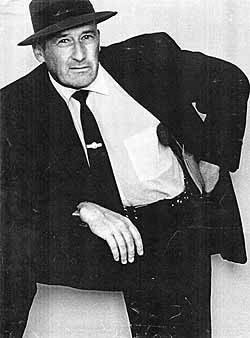 -- and that the Hammer character as written was, shall we say, catnip to women (he actually beds gorgeous Bond girl Shirley Eaton at one point), then one would have to agree that the decision speaks well for the author's self-confidence, if not his connection to reality.

In any case, it is worth nothing that Spillane's appearance in TGHs, however, absurd, inspired a hilarious essay by the great Terry Southern (anthologized in his 1967 collection Red Dirt Marijuana). In it, Southern, momentarily taken aback by the Spillane casting, wonders if it might start a trend. Specifically: what if unsightly wall-eyed frog philosopher Jean-Paul Sartre got it into his head that he should dance the lead in the ballet Giselle? Was there a promoter in Paris who wouldn't give him the opportunity?

Forty years later, I'm still waiting for the film version of that one.