The Horror of It All 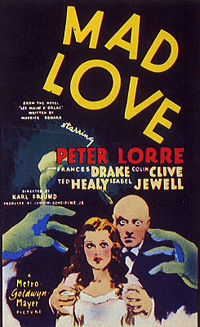 So I'm up early this morning perusing Turner Classic Movies (a/k/a basic cable and the Film Gods gift to cineastes everywhere) when (to my delighted surprise) on came a trailer, heretofore unknown to me, for one of my favorite old horror movies -- Karl Freund's 1935 Mad Love. In case you've never seen it, that's the one about the insane world class surgeon who's in love with a Grand Guignol actress married to a brilliant concert pianist. When the pianist loses his hands in a train wreck, the romantically crazed doc sews on a pair taken from a just-executed knife-wielding murderer, and then the usual wacky complications ensue. Great stuff, and according to critic Pauline Kael, at least, Orson Welles appropriated a lot of its visual imagery for Citizen Kane. But I digress.

In any case, the trailer's period charm aside, what struck me about it was the opening ad line -- star Peter Lorre (in his first American role) is described (by Charlie Chaplin, no less) as "the greatest living actor." Strong words, as they say, and unminced, Charlie.

Anyway, here's the clip in question (proving, once again, that YouTube is the greatest thing to happen to Western Civilization since the Library at Alexandria). Incidentally, how this nightmare of expressionist film angles and sadism ever came to be made at a glamour factory like MGM is a mystery that may be never be solved.

Lorre's less well known these days than he should be, but he had a long and illustrious career in and out of Hollywood. Mostly -- as a result of his astounding performance as a child killer in Fritz Lang's M -- he was typecast as a villainous grotesque of one kind or another, but in fact he got to employ his considerable acting chops on a lot of rather more interesting and complex roles, perhaps the most famous being the epicene Joel Cairo in The Maltese Falcon (and by epicene, we mean the character in the original Dashiell Hammett novel was obviously gay, but the 1941 censors were having none of it). Toward the end of his life, he wound up playing broad comedy in various Roger Corman Poe adaptations, the best of which is The Raven, with Boris Karloff and a young Jack Nicholson. Turns out Lorre looked very good in feathers.

Lorre also showed up in a lot of B-movies, the mind-blower of which is the 1940 classic Stranger on the Third Floor. Co-written by, of all people, Nathaniel West, it's a moody, visually inventive little psychological thriller that's often referred to as the first film noir. In fact, it has a lot of the stylistic tropes of post-war noir -- an urban setting, weird low camera angles, and an innocent protagonist desperately trying to clear himself of a crime he didn't commit -- and Lorre (who's top-billed in what is nevertheless a supporting role) is great as a mysterious shadowy presence in a weird white scarf. Here's a clip to give you an idea.

You can order Mad Love here: Stranger seems to be available only as a Spanish DVD that won't work on most American players, but TCM shows it from time to time and it's definitely worth looking for.

Meanwhile, here's perhaps the funniest Lorre parody ever (and there were lots, including the hilarious 1946 Bugs Bunny cartoon Hare-Raising Hare) -- Spike Jones' "My Old Flame."

That's the great Paul Frees (voice of Boris Badenov on Rocky and Bullwinkle) as Lorre, and as you can hear, it's a dead-on impression of what the crazed surgeon in Mad Love might have sounded like if he'd had a second career as a romantic crooner.