The Melancholy Dane: This Time It's Personal

Headed to my local Hell Octaplex over the weekend to catch up with the latest crop of Summer Blockbusters and while there I had had a strange thought: Apparently I have now sat through the intermittently amusing trailer for the forthcoming (August 22) Steve Coogan comedy Hamlet 2 somewhere in the vicinity of four thousand times. Okay, maybe five or six times. In any case, it got me pondering some of the more memorable screen adaptations of Hamlet 1.

Not as good as Richard III, but the scene where the guy gets vomited on by a yak is actually worthy of Shakespeare.

Frank Capra lives. Plus: It's official! Kevin Costner is no longer an asshole!! Also: Major Kira from Deep Space Nine gets to slap Dennis Hopper in the puss. 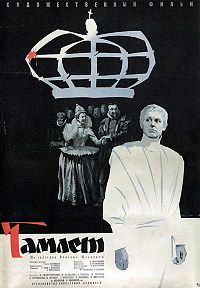 Anyway, Shakespeare's most famous tragedy is also one of the most often filmed, beginning with a 1900 snippet starring Sarah Bernhardt in drag. For my money, though, there are three that really stand out. The most cinematic (it's actually filmed on location at some moldy old castle overlooking the sea) is the 1964 Russian version, which is adapted by Boris Pasternak of all people, and features a gorgeous score by Dimitri Shostakovich. By far the oddest is the 1961 German TV Hamlet, Prinz von Dänemark starring Maximillian Schell, a dubbed farago in which Schell delivers all the famous speeches in an English version that's badly translated from a bad German rendering of the original Elizabethan [not for nothing was this one skewered by the gang at Mystery Science Theater, and you should order it immediately.]

Hands down the most interesting, however, is Ethan Hawke's grunge version from 2000, about which some brilliant critic whose initials are S.S. had the following to say...

I actually really love this one, which has all sorts of felicitous little touches around the edges. The ghost of Hamlet's father, for example (a scary Sam Shepherd) disappears into a soda machine rather than a parapet, and Hawke as Hamlet leaves the "Get thee to a nunnery" speech on Ophelia's answering machine. Plus Bill Murray as Polonius is, frankly, genius casting.

As for Coogan's sequel, I'm reserving judgement, although I confess I'm intrigued by the possibility of a third installment -- Hamlet 3: Electric Boogaloo!