Just a quick postscript for anybody who was intrigued by our recent review of What We Do is Secret, Rodger Grossman's excellent bio-pic on seminal LA punk band The Germs and their doomed lead singer Darby Crash. As I mentioned in the review, several sequences are frame-for-frame restagings of footage from Penelope Spheeris' ground-breaking 1981 punk documentary The Decline of Western Civilization; I was shocked, frankly, to discover it's not currently available on video, but I thought you might enjoy the comparison between Shane West's performance as Crash, as seen in the WWDIS trailer --

-- and the real Crash as seen in an excerpt from the Spheeris film (and thank god for YouTube).

Incidentally, Spheeris, who's probably best known for having directed the mega-hit Wayne's World, is a filmmaker who probably deserves a serious reassessment. Her wonderful followup to Decline, the 1988 The Decline of Western Civilization Part II: The Metal Years (like its predecessor, currently unavilable on DVD) notwithstanding, her masterpiece is probably the 1987 Dudes, starring Two and a Half Men's Jon Cryer, Flea from the Red Hot Chili Peppers and Daniel Roebuck, which is essentially a very violent, very funny low-budget punk rock version of Easy Rider.

Here's Spheeris on the set with Cryer and Roebuck; as you can see, she's not just an auteur, she's also quite the babe in a mature punkette sort of way. 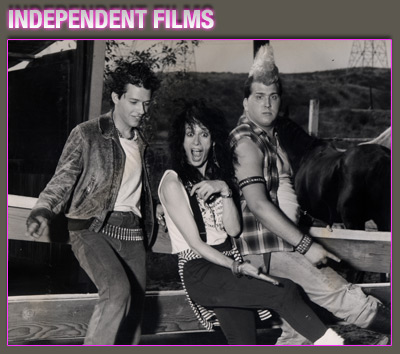 Dudes, of course, is also mysteriously unavailable on home video at the moment, so you'll have to take my word on all of this. In the meantime, here's a link to Spheeris' official website for the lowdown on a remarkable American artist.

Tags: What We Do is Secret, Rodger Grossman, The Germs, Penelope Spheeris, The Decline of Western Civilization, Shane West, Dudes
Print