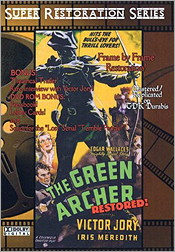 DVD Event of the Week: Is it Perils of the New Land, Flicker Alley's box set of early silent American exploitation films including the groundbreaking 1913 Traffic in Souls? Is it HBO's box set of their gritty Baltimore-set policier The Wire: The Complete Fifth Season? Is it Universal's disc of Leatherheads, the George Clooney/Renée Zellwegger screwball period football comedy?

All worthy, to be sure, but if you'll pardon me, instead I'm going to wax rhapsodic about something from earlier in the year that I didn't get a chance to write about at the time -- the Restored Serials double disc set of the incredible 1940 chapter-play The Green Archer, written and directed by the great James W. Horne.

Horne was a veteran of early silent films and serials who in the late 20s wound up at the Hal Roach studios, where he directed mostly comedies, including what's widely regarded as Laurel and Hardy's masterpiece, the great Way Out West , in 1937. In 1938, he was enticed over to Columbia, which was starting its own serial unit, and he directed The Spider's Web, which turned out to be the most popular cliffhanger of the year. He continued to make serials for Columbia until his death in 1942, but because of his commercial success he was pretty much left to his own devices. As a result, most of Horne's chapterplays are hilariously tongue in cheek. He'd play everything more or less straight for a few chapters (apparently to con the exhibitors) and then veer off into total silliness -- encouraging his actors to deliver the most melodramatic hambone line readings imaginable, or staging fight scenes where the hero is beset by six or seven bad guys and beats the crap out them anyway. The Green Archer is pretty much his masterpiece in this regard. The lead villain, played by the witty James Craven, finds himself saddled with an utterly incompetent gang of henchmen who continually screw up even his simplest instructions, and he spends most of the ostensibly serious film doing fuming slow burn comedic takes a la Edgar Kennedy; my favorite comes when he interrupts his bumbling accomplices engrossed in a game of tiddleywinks when they should be out shooting the good guys or something equally evil.

Here's a clip that should give you an idea of the wonderfully nuttiness of the thing. (Note the incredibly cheesy painted cardboard flats in the castle hallways).

Columbia let the rights to most of their serials lapse years ago, so the prints you see on the various home video versions are usually from public domain 16mm copies of uneven quality. For this new DVD set of The Green Archer, the folks at Restored Serials did a painstaking, frame by frame clean-up job from the best available print; with the exception of one or two outdoor scenes that are a little dark, the results are fabulously detailed. Bonuses include a fascinating interview with star Victor Jory (a wonderful character actor probably best known as the evil overseer in Gone With the Wind), the re-release trailer, and (on DVD-ROM) the complete script for the interesting "lost" serial Terrible People; you can, and should, order it here.

5. The Mask of Zorro (Martin Campbell, 1998)
Superior (and wonderfully sexy) derring-do, with Antonio Banderas in the role he was born to play. The sequel sucks, though.

4. The Lone Ranger (Stuart Heisler, 1956)
Republic did a couple of okay serials featuring the daring and resourceful Masked Rider of the Plains in the late 30s, but this feature -- a gratifyingly big budget version of the TV show starring Clayton Moore and Jay Silverheels -- is the Lone Ranger the way you want to remember him. One of the best kids movie for adults ever made.

3. Fantomas (Louis Feuillade, 1913)
The fabulously surreal exploits of cinema's original great criminal mastermind. Brit critic David Thomson said it best -- Feuillade is the first director whose work never needs to be excused in any way because of when it was made. 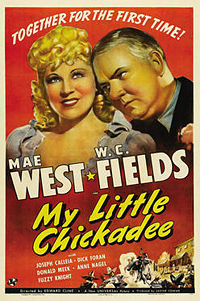 2. Samson vs the Vampire Women (Alfonso Corona Blake, 1962)
The vampire women of Mexico have awakened from their sleep, commanded by their master, The Evil One, to find him a bride. Legendary masked Mexican wrestler El Santo (called Samson in the dubbed English version) is summoned to kick their sanguinary asses.

And the all-time coolest masked mystery man flick, it's not even close so don't give me a hard time or swear to god I'll smack you, is obviously --

1. My Little Chickadee (Edward F. Cline, 1940)
Joseph Calleia is The Masked Bandit romancing Mae West, who's otherwise occupied frustrating husband W.C. Fields' conjugal advances. A hoot from stem to stern. "I'd like to see Paris before I die. Philadelphia will do!"

Tags: Perils of the New Land, Traffic in Souls, The Wire: The Complete Fifth Season, Leatherheads, The Green Archer, Way Out West
Print