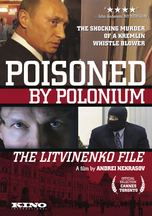 DVD Event of the Week: Is it Genius Products new version of Lonesome Dove, the acclaimed 1989 Western mini-series now retrofitted in widescreen and Dolby Surround? Is it the Miramax disc of Smart People, the 2008 indie comedy starring an against-type Dennis Quaid and Juno's Ellen Page? Or is it Severin Films three-disc set of Enzo G. Castellari's Inglorious Bastards, the 1978 Italian action film currently being remade by Quentin Tarrantino?

All worthy to be sure, but for my money, the winner is Kino International's bonus-laden disc version of Poisoned By Polonium: The Litvinenko File, director Andrei Nekrasov's riveting 2008 documentary on the murder of Kremlin whistleblower Alexander Litvinenko.

Litvinenko, you'll recall was the exiled former KGB agent turned outspoken critic of Vladimir Putin's Russian regime who died an agonizingly hideous death in 2006 after a tiny but lethal dose of radioactive Polonium-210 was slipped into his tea by former KGB colleagues at a London restaurant three weeks earlier. Nekrasov, Litvinenko's friend as well as a first-rate documentarian, makes a pretty damning case for the Putin government's complicity in the murder, and he places it all in the context of both Russia's recent slide back into totalitarianism as well as a history of Russian secret police outrages going back to the pre-Revolutionary era. Kino's disc version features a razor-sharp letterboxed transfer; interesting extras include an interview with Litvinenko's widow, plus two earlier films by Nekrasov, one of which is an equally riveting investigation of the 1999 bombing of a Moscow apartment building. Highly recommended.

Okay, that said, and because things will be relatively quiet around here till Monday, here's a (hopefully) entertaining little project for us all: 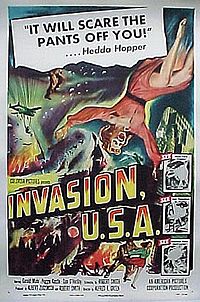 3. Invasion USA (Alfred Green, 1952)
Those perfidious Russkies (never actually mentioned by name, although they speak with Russian accents) attack us without a warning, as is their wont. Eventually, Boulder Dam is nuked, but it doesn't stop co-star Gerald Mohr from boinking the lovely Peggie Castle. A similar storyline is the basis for John Millius's Reagan Era classic Red Dawn which has a bigger budget and even more unintentional laughs.

2. The Manchurian Candidate (John Frankenheimer, 1962)
"Raymond Shaw is the kindest, bravest, warmest, most wonderful human being I've ever known in my life." Pretty much the ultimate in Cold War paranoia, and I was stunned to learn recently that it was originally released during the week of the Cuban Missile Crisis.

And the all-time coolest Commies Under Every Bed! film, it's not even close so don't give me a hard time or swear to god I'll smack you, is obviously --