DVD Event of the Week: Is it Fox's disc of Nim's Island , the aggressively adorable family flick about Abigail Breslin and a plucky pelican? Is it Kino International's beautifully restored versions of The Outlaw and His Wife and A Man There Was/Ingeborg Holm, three silent classics by the great Victor Sjöström? Or is it Sony's The Counterfeiters, Stefan Ruzowitzky's German-language Oscar winner about a real life swindler who conned the Nazi's during WWII? 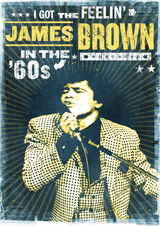 All worthy, to be sure, but for my money it's Shout Factory's I Got the Feeling: James Brown in the '60s, a three disc box set featuring the director's cut of David Leaf's astounding documentary The Night James Brown Saved Boston.

The title of the thing is, of course, not hyperbole, but if you're too young to remember the 60s -- or if you're not from Boston -- here's the historical context. In the wake of the assassination of Dr. Martin Luther King Jr. on April 4th, 1968,, a series of race riots broke out in major cities all over America. James Brown -- who was in many ways Dr. King's equal in terms of the respect and affection he commanded in Black America -- was scheduled to put on a show at the Boston Gardens the next evening. Obviously, the potential for catastrophe was enormous, but as one critic put it "instead the televised broadcast of Brown's performance is said to have kept the streets quiet that evening, giving citizens a distraction from looting and unifying the city in peaceful memorial to one of history’s great professors of peace itself." It's an incredible true story, and Leaf's documentary does a yeoman job in telling it, with lots of interesting (if de rigeur) talking heads interviews with the likes of Rev. Al Sharpton, Cornel West, former Boston Mayor Kevin White, and Brown's long time manager Charles Bobbitt intercut with footage from the show itself. The bottom line: Time capsules (albeit from terrifying, tragic times) don't get much neater. The Shout Factory set also includes a disc of the complete concert as it was broadcast that night (on PBS, of course), plus another performance peak complete Brown concert from the Apollo Theater a month earlier. (Incidentally, that third disc has Brown and His Famous Flames blowtorching their way through "Out of Sight," from the 1964 drive-in concert film classic The T.A.M.I. Show as a bonus. As you can see from the trailer below, somebody really needs to release the whole flick on video pronto).

Okay, that said, and because things will be relatively quiet around here till Monday, here's a perhaps not immediately relevant but (hopefully) nonetheless entertaining little project for us all:

Most Memorable Non-Musical Performance by a Pop/Rock Star in a Comedy or Drama!!!

5. Bob Dylan in Pat Garrett and Billy the Kid (Sam Peckinpah, 1973)
Dylan plays a character named Alias, which is really all you need to know about how cool he is here. Clu Gulager only wishes he could mumble as interestingly.

4. Flea in Back to the Future III (Robert Zemeckis, 1990)
The Red Hot Chili Peppers bassist has a small but disturbing part as Needles, a possibly psychotic punk who challenges Michael J. Fox to a drag race.

3. Mick Jagger in The Man From Elysian Fields (George Hickenlooper, 2001)
Jagger plays the head of an escort service that provides intelligent men for extremely wealthy women. A very interesting film, despite some bad reviews, and it's the first part since Performance that provided Mick with a believable context for his signature mix of slightly sinister macho aggression and the weirdly effete.

2. Michael Hutchence in Frankenstein Unbound (Roger Corman, 1990)
The INXS singer swans around rather convincingly as Percy Shelley opposite Jason Patric's Lord Byron in this revisionist version of the oft-filmed tale.

And the all-time pop star turned thespian in a film, it's not even close so don't give me a hard time or swear to god I'll smack you, is obviously --

1. Tony Bennett in The Oscar (Russell Rouse, 1966)
As the immortal Hymie Kellie. Hey, I said the most memorable, not the best. And if you've seen Bennett's "And here you sit, on top of a glass mountain called 'success' " speech in this gloriously awful Inside Showbiz melodrama, you've seen one of the great cinematic train wrecks of all time.

Tags: Nim's Island, The Counterfeiters, Pat Garrett and Billy the Kid, Back to the Future III, The Man From Elysian Fields, Frankenstein Unbound, The Oscar
Print