Elvis Has Left the Building and I Don't Care

Like so many folks, I have questions -- serious and existential -- that have plagued me over the years. What is the meaning of life? Did Dean Martin really drink? Is Bufferin the same as regular aspirin? What is the secret formula that makes Orange Julius so devlishly delicious? Sure, we all know the feeling.

But for me, perhaps the most perplexing of all of them have always been (1) Which of the 31 films starring Elvis Presley is the absolute worst? and (2) which Elvis soundtrack song is the rankest?Well, I'm here today to tell you that after decades of contemplation, I have come to the conclusion that the answers are (from 1968) the appalling contemporary western comedy/musical Stay Away, Joe and (from that self-same cinematic toxic waste-dump) the plaintive love madrigal "Dominick the Impotent Bull."

The title is pretty much self-explanatory, by the way; here's a clip of Elvis urging said sad beast to fulfill his husbandly duties, in case you think I'm making this up. 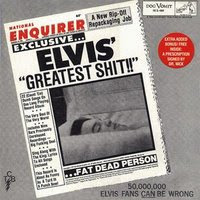 In fairness, it should be pointed out that Elvis hated this song so much that there was a clause in his contract stipulating it could not be released as a commercial record during his lifetime. And RCA, his long-time label, also knew the thing was a turkey; in fact, Stay Away, Joe was the first Elvis movie that didn't generate an accompanying soundtrack album. In any case, I first heard of the song in 1983 when World's Greatest Rock Critic ("Holy") Greil Marcus wrote it up in the context of a then just-released vinyl bootleg entitled Elvis' Great S**t (on the charmingly monikered Dog Vomit label). A collection of the really awful stuff from various Elvis movies -- including "Queenie Wahine's Papaya." "Do the Clam" and the immortal "No Room to Rhumba in a Rumble Seat" -- this catalog of horrors was also notable for its back cover art, a repro of one of the drug scrips the infamous Dr. Nick provided for the King in his Roi Soleil jumpsuit period. I actually owned a copy of the LP back in the day; it's in storage somewhere with the rest of my vinyl, although I'm told there's a recent, and expanded, CD version floating around. In any case, get me drunk sometime and I might be moved to burn you a copy.