Hey, It Was the Seventies -- We Were All A Little Over the Top 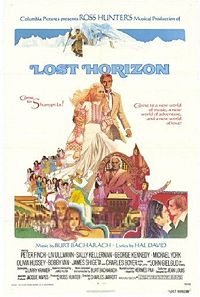 With due respect to fans of Xanadu, Thank God It's Friday, and Staying Alive (the Bee Gees replaced by Frank Stallone? Genius!) I think most sentient mammals are in agreement:

Hands down, it's the 1973 musical remake of Lost Horizon. Written by Larry Kramer (yes, him). And starring Peter Finch, Liv Ullman, Sally Kellerman, Bobby Van, Sir John Gielgud with his eyes taped back to make him look like your six year cousin pretending to be Chinese, Charles Boyer in a diaper, and a chorus of Buddhist monks in little orange Mark Spitz bathing suits.

Here's one of the big production numbers, featuring a song that helped break up the previously unassailable team of Burt Bacharach and Hal David.

True story: Back when I was a baby rock critic, I was invited to an industry pre-premiere screening of LH (Thursday, March 15, 1973 -- a day that will live in infamy) at (if memory serves) the majestic Ziegfeld Theater. It was for charity, as I recall, and most of the audience was a good thirty or forty years older than I was at the time and much better dressed; I'm pretty sure it was in fact a black-tie event, which means that I stood out along the lines of Raymond Chandler's famous tarantuala on the angelfood cake. In any case, I spent most of the first forty minutes of the film desperately trying not to laugh, for fear of having the wrath of the assembled movers and shakes descend on my punk ass, and by trying not to laugh I mean literally biting my hand to the point of drawing blood. You can imagine my relief, then, when during the above musical number, I finally started to hear nervous titters emerging from other quarters of the audience, which were then followed by an absolute tsunami of helpless guffawing from the crowd at large.

Trivia note: In the film, the library at Shangri-La is supposed to be a repository for the world's great literature. If you look closely, there are a number of Readers Digest Condensed Books on its shelves.

Postscript: In case you're wondering, LH, perhaps unsurprisingly, is not on DVD at the moment, and apparently has never been on home video at all, with the exception of a restored version that was briefly available only on on laserdisc in the late 80s. The soundtrack, however, is still out there for purchase on CD here, although, obviously, it is recommended only to the most perverse of ears.